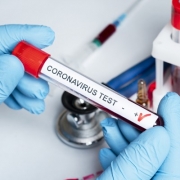 In a tweet that many have claimed they have been waiting for, President Donald Trump has confirmed he has tested positive for coronavirus and has promised that, “We will get through this together”.

Hicks was seen traveling with Trump as they made their way to Ohio for the televised presidential debate against Joe Biden. Footage showed some of Trump’s family not wearing masks, sparking fears that the virus has already spread further.

With the news coming just two weeks before the next presidential debate, and a month before the elections on November 3, the diagnosis has come at a terrible time for the president.

Current guidelines from the Centers for Disease Control and Prevent (CDC) state that if you test positive for coronavirus, or even have symptoms, you must self-isolate for 10 days while those who have been around an infected person will see their movements restricted, even if they have received a negative test result.

The news has again spurred pro-mask wearers into action after Trump had been repeatedly seen not wearing a mask nor socially distancing while conducting his official engagements.

At the age of 74 Trump is in a high-risk category so will remain under close watch from his medical team. In a statement released by Trump’s physician, Dr Sean Conley, it was confirmed that both Trump and Melania were “well at this time”. It also confirmed that they would be remaining at the White House while they recover from the virus.

The statement continued, “rest assured I expect the president to continue carrying out his duties without disruption while recovering, and I will keep you updated on any future developments.”

A similar statement was released when British Prime Minister Boris Johnson was confirmed to have coronavirus earlier in the year. Johnson had repeatedly boasted that he had shook hands with those infected in the early stages of the pandemic. He subsequently was admitted to hospital and had to receive oxygen while in the Intensive Care Unit to ensure he made a full recovery. During this time the UK’s foreign secretary and first secretary of state stepped in to ‘deputize’ for Johnson until he was well and, due to the severity of his illness, plans had been drawn up in case the prime minister had died. If the same happens with Trump then vice president Mike Pence would take over until the president was well again.

Johnson and Trump are not the only world leaders to have contracted the virus with Brazilian president Jair Bolsonaro testing positive in July after months of denying that covid-19 was a serious issue and even referring to it as “little flu”.

Iran’s deputy minister Iraj Harirchi was one of the first leaders to be infected with the virus while questions are still circulating over the death of Burundi’s president-elect Pierre Nkurunziza who, although officially died in June from a heart attack, was rumored to have died from coronavirus after passing it onto several others first.

Trump’s latest physical examination highlights that his weight – 244lbs – marks him as obese due to his height of 1.9m. Although his doctor said at the time that the president ‘remains healthy’ this is not good for someone who has coronavirus and there are those who are concerned that the outcome may not be good news for the Trump family.

However many have not welcomed the news and some are even wondering if it is Trump’s very own ‘fake news’. Trump has recently hit the headlines, and not necessarily for good reasons. Following his admission that he believes postal voting will lead to fraud and therefore has not confirmed he will concede his position peacefully if he loses Trump went on to take part in a presidential election debate with Democrat Joe Biden which at times descended into the kind of shouting match you would expect in a kindergarten playground.

This included the Proud Boys incident where, when asked to condemn the white supremacist group Trump instead opted to tell them to “stand back and stand by’, a phrase that the group has not only included in their imagery but also used it as an endorsement from Trump. The following day the president had to admit that he had not actually heard of the group.

Coronavirus is continuing to run riot across the world and recently hit the 1 million deaths milestone, 200,000 of which were in America. Currently over 7.2 million have become infected by coronavirus within the United States; a number many have felt is due to Trump’s inadequacies in dealing with the health crisis.