Blog - Latest News
You are here: Home1 / News2 / Real Estate News3 / House Searches Up By 30% Year on Year in January 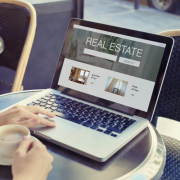 Despite a rocky start to the year, the property market appears to be putting its best foot forward as it experiences a surge in interest for new properties during the month of January. According to UK property website Rightmove, it has had its busiest ever start to the year, with site visits up by an impressive 30%.

If we break down this figure a little further, this growth equates to around six million daily visits on the 5th and 6th January. This is in addition to reports that the number of enquiries to realtors from those looking to buy a property is 11% higher year on year, with enquiries for rental properties up by 22% year on year. Some experts believe that this surge in interest is a direct result of indications that the temporary stamp duty legislation will be coming to an end as planned in the UK in April 2021. This legislation was brought in last year at the start of the pandemic, with the Chancellor of the Exchequer granting a temporary Stamp Duty Land Tax (SDLT) holiday on the first £500,000 of all residential property purchases in England and Northern Ireland. This move was expected to save the buyers as much as £15,000 on their property purchase. Despite the ongoing impact of the pandemic, there has been no suggestion from the UK Government that this initiative will be extended past the April deadline.

Reflecting on the surge in interest during January, Rightmove’s Director of Property Data, Tim Bannister, was quoted by Property Reporter as saying: ‘January is usually one of our busiest months of the year as people start to make new year plans to move, as was the case at the start of last year when we also had the post-election bounce that gave hope of an active spring market, before that all changed with the temporary closure from March until May. We didn’t know how this year would start with so much change and uncertainty around restrictions, but it’s been reassuring for those people hoping or needing to move that the demand we’ve seen so far is the highest we’ve ever had in January.

“The housing market has been allowed to stay open during these latest lockdowns and agents have already spent months working in a covid-secure way and creating a number of property videos, so buyers and renters starting out on their search this year will find that, alongside the safe viewing protocols, more agents are offering virtual viewings to help buyers and renters better shortlist the properties they want to go and see.’

Despite the surge in interest from potential buyers, there are indications that house prices in the UK will fall this year by around 5% fuelled by local factors such as the end of the temporary stamp duty holiday and more widespread global issues such as rising unemployment. Speaking to the Guardian newspaper, Russell Galley, managing director at Halifax, said: ‘While the economy should begin to recover in 2021, helped by the roll-out of Covid vaccines, the jobs market will inevitably adjust to the changes in demand that are occurring, and unemployment is expected to rise. With the stamp duty holiday also due to expire in March – and lower levels of demand – housing market activity is likely to slow.’

In the US, predictions are slightly more favorable. It has been reported that house prices are expected to increase by around 5% according to realtor.com. Despite unemployment remaining high, the growth is expecting to come from white collar and high-income workers, who have been able to transition to home working more easily whilst also continuing to earn a stable income. As reported by Mansion Global, George Ratiu, senior economist at realtor.com said: ‘A lot of the activity is being driven by Americans who are employed, or they are self-employed, they’ve been able to manage work, have savings and beyond savings are invested in other assets.’

Others are equally optimistic with regards to millennials in general. In an article for Forbes, Elana Knoller, Better.com chief product officer was quoted as saying: ‘We expect homeowners looking to refinance will do so sooner rather than later to take advantage of the low interest rate environment. While the Fed has indicated it doesn’t plan to hike rates soon, uncertainty over what the new administration might do in addition to broad availability of a Covid-19 vaccine, on top of what we hope is an improving economy, could bring an end to the ultra-low rates that we’ve seen this year. We will continue to see the growth of Millennial home buying regardless of the rate backdrop.’

Whilst it is clear that many homeowners will be impacted by a loss of income due to reduced hours or unemployment, there are equally a significant proportion of higher income earners who have the financial means to capitalize on the property market in the coming months. There is no doubt that the longer term impacts on real estate may be less favourable, but for the moment it appears to be holding its own.