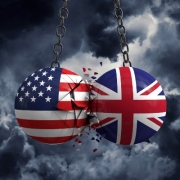 The last four years of America’s trade history has seen some trade deals and products become powerful tools used by President Donald Trump in an attempt to put “America first”, although others have seen the moves as attempts to exert more control throughout the world.

Trump has gleefully increased charges to imports as well as implemented tariffs on products, such as French wine and cheese, he has felt were more in favor of the producers rather than the deal. And while some of these actions have positively impacted America to some extent, there has also been claims Trump has abused his position to bolster his own businesses bottom line.

With many of the actions resulting in rising hostility from nations that may not necessarily wish to trade with America in the future, attitudes could already be starting to change following the announcement of Joe Biden’s presidential win.

But how could things change? The ‘special relationship’ with the UK has seen many ups and downs over recent years, from former president Barack Obama’s announcement that Brexit would push a potential trade deal between the UK and America to ‘the back of the queue’ to Biden’s announcement that changing aspects of the Northern Ireland Good Friday Agreement could become an issue.

It is a well covered fact that British trade officials have been working on building a good relationship with Biden’s team for a while, however the UK Prime Minister Boris Johnson and his parliament proposed an Internal Market Bill which could have implications concerning the border between the Republic of Ireland – part of the European Union (EU) – and Northern Ireland which is part of the United Kingdom and therefore a sticking point in the Brexit negotiations between the UK and the EU. This move resulted in Biden tweeting “We can’t allow the Good Friday Agreement that brought peace to Northern Ireland to become a casualty of Brexit.

“Any trade deal between the U.S. and U.K. must be contingent upon respect for the Agreement and preventing the return of a hard border. Period.”

However with both the UK and Biden looking at membership of the Comprehensive and Progressive Agreement for Trans-Pacific Partnership (CPTPP) – a free-trade partnership involving 11 countries – there could be a solution that would keep both parties happy.

As well as the UK, America has trade deals with many other nations although some relations have soured due to restrictions or actions implemented by Trump. For instance, the relationship between the EU and us is currently at an all time low.

Tensions rose between aircraft makers Boeing (US) and rivals Airbus (EU) following claims that there was state help being provided. Although these claims were made before Trump was elected he continued to worsen the relationship by implementing tariffs of around $7.5bn on a large number of European luxuries, a move many in Europe saw as a reaction to the disagreement.

Experts are predicting that while Biden will be looking at the tariffs – as well as those imposed on imports of aluminum and steel – there is no guarantee he will remove them, however he is expected not to increase any tariffs that are already in place.

It is important to remember that although Biden’s campaign played out in a manner that was significantly different to Trump’s the two men have similar priorities.

While Trump’s “Make America Great Again’ slogan was criticized by many, it is similar to Biden’s “Buy American” slogan that was repeated throughout his campaign.

America’s economy is continuing to struggle due to the near-paralysis of business throughout the current Covid-19 pandemic. Unemployment has increased significantly and Biden has promised to invoke penalties on American firms that choose to have their jobs on foreign soil. The move is an attempt to bring business back to the U.S. and increase not just employment and the economy, but also a sense of pride in working in one of the most powerful nations in the world.

Biden is also concerned about the way China is progressing with their attempt to increase their place in the business world, as was Trump who some believed opted for a ‘bully-boy’ tactic – often choosing his battles with large Chinese corporations and trying to encourage his allies to back him up, as was the case with Huawei who are now asking the UK to reconsider their 5G ban now Trump has been defeated.

While Biden is also keen to keep the business world an even playing field, he prefers to work with his allies, rather than against them.

Other organizations that have seen the wrong end of Trump’s policies is the World Trade Organization (WTO), who has continued to receive skepticism and distrust from Trump. There is belief that with a new president there will be a chance for the organization to reform and improve, working alongside the other members and observers.