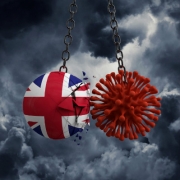 With the UK currently struggling with coronavirus surges and the country using a tier system to try and slow the spread, the government has announced that millions more will be subject to the strictest rules from Boxing Day onwards.

A new Covid variant has been wreaking havoc across the UK and the latest government decision comes as they attempt to curb its ‘dangerous’ spread. Six million people will join the nearly 18 million in London, the south-east and east of England who have been in tier 4 ‘stay at home’ restrictions since last weekend.

“We all know that 2020 has been a hard year. And it is ending in this festive period, which is going to be very different,” UK Health Secretary Matt Hancock told a Downing Street press conference, as he unveiled the latest moves and acknowledged that tier 3 measures were not enough to control the variant.

“And I know that the vast majority of people watching today and across the country understand what we need to do together to get through this. So today we’re announcing further action within the tiering system and also some further progress on vaccines and on testing.

“And I just wanted to say this before I set out the details of what we’re going to have to put in place: I know this action has consequences. And I know how difficult it is. But I also know that it is right to take the action that is necessary to control this virus.

“Across the country, cases have risen 57% in the last week. The average daily COVID hospital admissions are 1,909 a day – that’s the highest figure since mid-April.”

Separately, Hancock revealed that two cases of another new variant of Covid-19 linked to South Africa have been identified in the UK. The health secretary, who said cases and close contacts of cases were being quarantined in the UK and immediate restrictions were being imposed on South Africa, added: “This new variant is highly concerning because it is yet more transmissible and it appears to have mutated further than the new variant that has been discovered in the UK.”

Wales, Scotland and Northern Ireland have also announced their own strict nationwide restrictions over the past weeks in order to try and help contain the new variant, which is thought to be up to 70% more infectious.

Robert Jenrick, the UK’s communities secretary, said that the government was adverse to imposing a third national lockdown but stressed that it was crucial to ensure that the tiered system was ‘sufficiently robust’ in order to get the disease under control.

Jenrick also described the variant as a ‘significant gamechanger’, highlighting its prevalence outside London and the south-east of England, although it is still much more concentrated in and around the capital.

“What we want to do now is just make sure that the tiered system is right, that it’s sufficiently robust, that it can withstand and do the job, which is to keep the virus under control, even in these new changed circumstances,” he said.

“The latest analysis shows a strong correlation between areas with the most rapid rise of cases and prevalence of the new strain of COVID-19. The government has decided to act ahead of the formal review point, in order to contain the spread of this new and more transmissible strain,” a government statement on the announcement said.

“Since the end of national restrictions, the situation in the South and East of England has deteriorated. New cases have continued to rise and hospital admissions have increased. Without urgent action this trend would continue at an increasingly rapid rate, leading to a rise in hospital admissions and deaths in the following 2 weeks and hitting the NHS at its busiest time of year.

“New data suggests that the increasing speed of transmission in London, the South East and East of England is being driven by the new variant of the virus. There is no current evidence to suggest the new strain causes a higher mortality rate, or that it affects vaccines and treatments, but the latest NERVTAG analysis continues to indicate that the variant is more transmissible than other strains,” it continued.

“Tier 3 and 4 areas will continue to be prioritized for community lateral flow testing, with over 100 local authorities now having signed up to the enhanced testing support program, and some Tier 2 areas also eligible. More than 2 million tests have already been deployed to over 100 local authorities to start community testing through the Directors of Public Health program.

Scientists at PHE Porton Down have confirmed that Lateral Flow Device tests can successfully detect the new variant of SARS-CoV-2.”