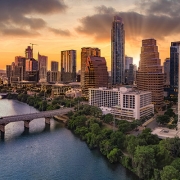 Millions in Texas are living without warmth, fresh water and food as the state continues to suffer the devastating effects of a polar vortex, a weather pattern usually only seen in the Arctic.

Over the past week, Texas has recorded its lowest temperatures for 30 years, with some areas reaching as low as below 0 Fahrenheit. Due to the usual hot weather in Texas, homes and infrastructure across the state were not prepared for the storm and so indoor temperatures quickly slipped below zero as the storm set in.

This has meant that there have been frozen pipes bursting and heating systems failing all across the state. Widespread outrage towards authorities has also emerged as citizens ponder why the storm was not better prepared for.

“We provide warming centers across the entire state of Texas for everybody who’s in a situation where they cannot be warm. In any large city at a minimum, there will be dozens and sometimes maybe approaching a hundred warming centers to help the people in our state,” Texas Governor Greg Abbott revealed during a press conference.

“And so we have the National Guard deployed across the state, as well as the Texas Department of Public Safety, the Texas Transportation Division, even Texas Parks and Wildlife working with local officials to make sure that our fellow Texans, they will be taken care of during this trying time,” Abbott said.

“But our same goal at the same time is to make sure that we have ERCOT working around the clock, as well as working with the energy generators to make sure they get the energy back online so people can get back in their homes and get back to normal as quickly as possible.”

While the storm has also affected nearby states, Texas has been hit disproportionately hard because it does not use the national power grid, instead going it alone with their own system, the Electric Reliability Council of Texas.

Power was turned off for Texas residents after the shutdown of several of the state’s power plants, when it became clear to suppliers that their equipment would not be able to handle the freezing temperatures, which may have caused a collapse of the grid.

“That will also increase the power that’s going to be produced and sent to homes here in Texas. That will increase the ability of gas-powered generators in Texas to increase power sent to the Texas power grid. Through multiple phone calls and actions, the White House has assisted Texas with orders that allow additional power generation or have accelerated the nuclear plant restoration.”

A ‘boil water notice’ has been issued for the city of Houston and its surrounding areas, with the US Centers for Disease Control and Prevention advising those in the area that all water planned for consumption, even if filtered, should be boiled as it may be contaminated.

Only boiled or bottled water should be used, including for brushing teeth, the CDC said.

At first, Greg Abbott used Texas’ current struggles to criticize renewable energy sources and reiterate his stance that fossil fuels remain the way forward. However, Mr Abbott told reporters Thursday that every source of power in Texas had been “compromised” – seemingly reversing those earlier comments blaming renewable energy for the state’s blackouts.

By Wednesday afternoon, the National Weather Service (NWS) said the worst of the storm had moved through Texas, but kept more than 100 million Americans under a winter weather warning.

“One thing that you want to do if you have a busted pipe or to prevent the consequences of a busted pipe is consider turning off your water supply. If you are a homeowner, there should be a location, typically outside, maybe near the curbside, where you have the ability to physically turn off the water supply to your house,” Governor Abbott said.

“Now, obviously that will eliminate water supply to your house. You can turn it off at the time of your choosing. If you do not turn it off, one thing that could happen is that when power does come back onto your house or when, just because the outside temperature begins to warm up, there will come a point in time when the ice frozen in your pipes will begin to melt and the busted pipe will suddenly start spewing water throughout your house, maybe in multiple locations. One way to slow down that water flooding into your house is by taking that action in advance to turn off your water.”