Blog - Latest News
You are here: Home1 / News2 / Science News3 / New Study Reveals That Chimps Narrow Down Their Social Circles As They... 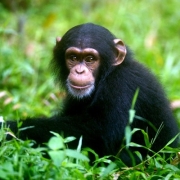 Most people will agree that as we get older, our social circle starts to diminish somewhat. Instead of filling our diary with large group gatherings and many acquaintances, we tend to focus on a smaller, closer set of friends. We start to move away from those who are critical or toxic and stick with those who enhance and enrich our lives. This was typically seen as a behavior specific to the human species and driven in part by our awareness of the passing of time. However, exciting new research has revealed that chimpanzees also follow a similar pattern when it comes to choosing their social circles later in life.

After studying the behaviour of chimpanzees for more than twenty years, researchers have identified that ageing male chimpanzees seem to prefer to socialise with their long-term friends over others within the group. And much like in human relationships, those select few friendships tend to become much stronger with age too.

To give you an idea of the scope of this study, over 78,000 hours were spent observing the behaviour of 21 male chimpanzees who were aged between 15 and 78. The study took place between 1995 and 2016 at the Kibale national park in Uganda. The reason why the study looked exclusively at males is because previous research indicated that they tend to have stronger social bonds than their female counterparts and they seem to interact more often.

When analyzing the interactions, the researchers were looking specifically at the differences between how both chimps appeared to view their relationship. This was centered around reciprocal grooming, as this is one of the clear indicators that both sides are interested in each other and are willing to invest their time in this activity. They classed ‘mutual friendships’ as those where both chimps seemed to engage with each other and enjoy the relationship equally. They classed ‘one-sided relationships’ as those where one chimp appeared more keen to be friendly than the other, perhaps where one chimp would groom the other but the act would not be returned. Finally, ‘non-friendships’ were identified when there was clearly no interest from either party.

What the researchers found was that older chimps tended to have much more mutual friendships than younger chimps, three times as many in fact, and far less one-sided friendships. Interestingly, the older chimps also appeared to be less aggressive or intimidating to the rest of the group, suggesting that they were mellowing somewhat with age. This is something which we also tend to see in the human ageing process, with older people seeking out more positive relationships and avoiding conflicting situations.

What is particularly interesting about this behaviour in chimps is that it suggests there is something other than general awareness of mortality driving this more positive behaviour. In humans, this shift to less tension and more enjoyable relationships has long been put down to the acute awareness of time passing by; the notion that as you age and you become aware that time is running out, you consciously decide to spend more of your time enjoying positive rather than negative experiences. Yet in chimpanzees, as far as we know they do not have this concept of time or impending death, suggesting that something else must be driving this behaviour. And if another factor is influencing this activity in chimpanzees, perhaps it is the same force at work in humans too, we just didn’t realize it. This theory is supported by those who were already critical of ‘socioemotional selectivity theory’, and believe that decreasing social circles are more driven by lowering social mobility and lack of opportunity rather than by an awareness of time.

The findings may not come as a surprise to many, considering that chimpanzees and humans share 99% of their DNA. As one of the paper’s co-authors Richard W. Wrangham explained, “It raises the possibility that we are seeing behavioral systems that have been shared evolutionarily back to our common ancestor, around seven or eight million years ago.”

The research is certainly important in helping us to better understand the world around us and how our closest species interact on a social level. The subject of ageing is one which is fascinating many researchers across the globe, partly due to our increasingly ageing population. In fact, according to the World Health Organization, there are currently 125 million people are aged 80 years or older and between 2015 and 2050, the proportion of the world’s population over 60 years will nearly double from 12% to 22% Clearly, gaining a better understanding of how our natural behaviors and patterns change over time will be incredibly useful in helping us to create future societies that best meet the needs of the older generation.

US Hits Highest Weekly Average Of Covid-19 Cases Since Beginning Of Pandemi...
Scroll to top