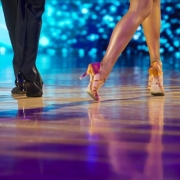 Strictly Come Dancing has been a firm favorite on our television screens across the world for many years. Based upon the UK version of Strictly Come Dancing, the programme is loved far and wide having been licensed by the BBC in over 60 territories, where it is also known under other similar names such as Dancing With The Stars. However with the Covid-19 anxiety that is impacting every industry right now, fans were propelled into anguish that the show may not be returning to our screens.

The show is based around a number of celebrities each being paired with a pro dancer to learn both latin and ballroom routines and compete for the Glitterball trophy but in the midst of living a socially distanced regime, it was speculated to be on hold this year. However, fans were delighted to see that the UK Strictly Come Dancing series kicked off on the 19th October.

It seems the show is still off to a great start. Hosted by Tess Daly and Claudia Winkleman, viewer ratings of this season’s premiere were reported to average at 8.6 million viewers, noted as an increase to the previous year’s ratings of 7.8 million.

The first full live show revealed which pro dancers were being paired with which celebrity partner, including comedian Bill Bailey, YouTuber HRVY and reality tv show Made In Chelsea’s Jamie Laing. The hosts remained standing at least a 2m distance at all times and the judges Craig Revel Horwood, Shirley Ballas and Motsi Mabuse also sat at podiums of the same distance.

Each dancing pair has formed a bubble to be able to participate and there was a smaller, socially distanced audience.

Although audiences are happy the firm family Saturday night favourite is back on our screens, UK viewers will be sad to know they will be missing out on the epic halloween week this year that normally showcases spectacular costumes and spooky routines. This is often a highlight of the series for many, as well as the trip to the Tower Ballroom in Blackpool, a monumental occasion for audiences and dancers alike. Also, well-loved judge Bruno Tonioli has not been able to be a part of this season so far, due to his commitments to the American show and the self isolation regulations that currently affect travel.

The American season already sprung into action. Dancing With The Stars returned to screens on the 12th Sep 2020 on ABC. The pandemic has not halted the 29th season, hosted by Tyra Banks, that introduced 16 new stars to this year’s competition including big names such as Carole Baskin, who for many has been a highlight of 2020 after soaring to fame in hit Netflix series Tiger King. Unfortunately Carole, the owner of Big Cat Rescue was voted out in week two. The series also features stars such as AJ McLean from boy band Backstreet Boys, Rapper Nelly and Chrishell Stause, actress and star of the Netflix hit series Selling Sunset.

However Australian fans who would have been eagerly awaiting the return of the show, which typically comes to their screens in Feb, were disappointed to learn that the show has now been discontinued.

Channel 10, the home of the Australian Dancing with the Stars has announced that the show has been cancelled and will not return to screens in 2021. Hosted by Grant Denyer and Amanda Keller, the show has confirmed it will not be returning but this is not due to difficulties caused by the pandemic, but because of the disappointing ratings of last season.

A spokesperson commented; “We have decided to hang up our dancing shoes, lycra pants and sequined jackets for the time being” and “We would like to express our sincere thanks and gratitude to all those involved in the show, in particular Amanda Keller and Grant Denyer, who were fabulous hosts, as well as all the judges, dancers, the stars and of course the crew.”

Dancing with the Stars first came to Aussie screens in 2004 and through to 2015 it was broadcast by Channel Seven. In 2019 the show was picked up by Channel 10 and introduced two new hosts Grant Denyer and Amanda Keller.

The revival show premiered on 18th February 2019, and a second series premiered on 9th February 2020. Yet Channel 10 have decided not to continue with a third series. As the pandemic began to take hold across the world at the beginning of 2020, the end of the filming of the 2020 series was subsequently recorded without an audience. This is becoming a common occurrence for many shows at present. The final drew in 635,000 viewers, still an impressive figure but unfortunately not enough to justify the budget of the show.

The entertainment industry is trying its best to survive and recuperate from the effects of Covid-19. Reality shows such as Strictly Come Dancing/Dancing With The Stars are remaining on our screens, but many without the traditional elements, such as a live studio audience, that provides a lot of atmosphere, and themed weeks that provide iconic moments. Will these changes try to ensure survival impact on the audience ratings? Could we see other dancing shows suffering a similar fate in the future? Whatever happens, Strictly Come Dancing looks set to bring some glitz and glamour back to our Saturday nights.