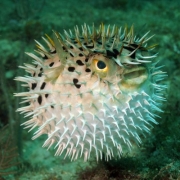 Forget the mysterious crop circles that grasped the interest of people across the world, a new type of underwater crop circle has been discovered in Australia. But fear not, scientists are fairly certain that it is the workings of the infamous puffer fish, who are widely known to produce complete and circular patterns in the sand.

The formations were discovered on Australia’s North West Shelf by marine ecologist Todd Bond as part of a marine life survey. After spotting one at about 100 meters, he continued the survey and found at least two dozen more. What is particularly striking about this particular discovery is that previously the phenomena was only seen in Japan which is over 5,000 kilometers away. So have the same species of pufferfish made their way to these distant and deeper waters, or is a new undiscovered species the culprit?

Knowledge of puffer fish ring nests has been around for some time. In fact, the rings were first discovered in Japan in the 1990s, but at the time scientists could not work out what was causing them. It took them around 20 years to finally work out that it was the impressive work of a particular species of male puffer fish. These dedicated males spend days creating the impressive structures and decorating them with shells so that the females will lay their eggs in the center. Females are reported to swim between the nests in order to choose which one to lay her eggs on.

Although there has not been any direct footage of the puffer fish creating these rings in Australian waters, the rings are almost identical to those which were discovered in Japan and have been recorded in action. Another interesting piece of the puzzle is that the rings were discovered at a depth of around 130 metres. Australian puffer fish tend to occupy much shallower waters and indeed, the rings found in Japan were made at just 30 meters deep. This calls into question what kind of species is occupying the waters at this depth and making these recognisable patterns. What’s more, it is clear from previous analysis that these ‘nests’ were designed to have visual appeal to egg-laying females, yet at such depths where light is much dimmer, it would be incredibly hard to see.

Scientists are also keen to discover whether the American circles are made by the same or different species to those in Japan. As if they are separate, it would be fascinating to determine if they both created these specific nesting rituals completely independent of one another.

This discovery is particularly important as it helps to remind scientists that there is so much about the world that is yet to be discovered. There is a real chance that these circles have been created by a species which has yet to be formally discovered and identified. There is also a chance that puffer fish are living in many more places than we know about.

Puffer fish are already well known in the scientific community for their sheer number of variations and adaptations. They are reported to be one of the most toxic vertebrates on Earth and their evolution has led to the complete disappearance of their ribs and pelvic bones. According to the Animal Emergency Service, there are 57 species of puffer fish, also known as blowfish and toadfish, found in Australia, with 48 of them found in Queensland. Puffer fish are known to contain a toxin called tetrodotoxin which happens to be one of the most deadly natural poisons known to man.

In Japan, puffer fish are a delicacy, but eating them does come with risks. This is because their organs contain neurotoxin tetrodotoxin. It is present in the liver, eyes, ovaries and skin. Chefs are very aware of the risks associated with eating this particular fish and strict procedures are undertaken to ensure they prepare it safely. That said, if not prepared correctly, it contains enough poison to kill around 30 adults! Thankfully occurrences of poisoning at restaurants is relatively low, as it tends to be those who have tried to prepare the dish incorrectly at home that fall victim to its toxic qualities.

All in all, the puffer fish is a beautiful and elusive creature that continues to hold many secrets for the scientific community. This exciting discovery is bound to spark further interest in discovering whether there are in fact new species in and around Australian waters, and how they have evolved from existing species. It will undoubtedly take further underwater investigations with camera and video technology where it is hoped that scientists can catch the mighty pufferfish ‘in action’. Until then, we will just have to speculate as to what could be causing these beautifully carved patterns in the sand.

CDC Guidelines: How To Stay Safe Over Thanksgiving

Treasure The Stunning State of Montana
Scroll to top