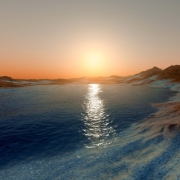 In 2018 scientists discovered a large salt water lake under the ice in the South Pole of Mars. Although it could not initially be confirmed as a body of water it was an exciting potential discovery that warranted further investigation. The presence of water on other planets could potentially point to the existence of life elsewhere in the Solar System, whether currently or historically. Many scientists believe that Mars once held bodies of water, in lakes and rivers, but today much of Mars’s atmosphere has changed leaving it drier and harsher. Now however, Scientists have confirmed the existence of these lakes and found more. Quoted in Nature, planetary scientist Elena Pettinelli at the University of Rome and one of the paper’s co-authors, stated: “we identified the same body of water, but we also found three other bodies of water around the main one, It’s a complex system.”

The lakes that were found spread over approximately 75,000 square kilometers (1/5 the size of Germany or the size of Scotland). Surrounded by the three smaller lakes, the largest lake is 30 kilometers wide. Longstanding evidence suggests that Mars was once home to large bodies of flowing water, and although now, Mars mainly harbors ice, scientists hope and believe that this lake is made up of liquid water. Co-author Dr Roberto Orosei, from Italy’s National Institute of Astrophysics in Bologna, spoke on these sub-surface lakes to BBC News: “It’s even more likely that these bodies of water existed in the past. Of course, the implication of this is that you would have a habitat or something that resembles a habitat… that lasted throughout the history of the planet, as Mars was undergoing its climatic catastrophe and turning from a relatively warm planet – though it’s not clear how warm – to a frozen waste, there was a place where life could adapt and survive.”

When the potential lake was discovered in 2018 via data from the Marsis Radar, researchers from the Roma Tre University in Italy since set out to confirm its existence, analyzing a much bigger dataset and using different techniques to examine the area, even utilizing methods that have been used to identify subterranean lakes on Earth in both the Arctic and the Antarctic. To do this, Nature reported: ‘the team used a radar instrument on Mars Express called the Mars Advanced Radar for Subsurface and Ionosphere Sounding (MARSIS) to probe the planet’s southern polar region. MARSIS sends out radio waves that bounce off layers of material in the planet’s surface and subsurface. The way the signal is reflected back indicates the kind of material that is present at a particular location — rock, ice or water, for example. A similar method is used to identify subsurface glacial lakes on Earth. The team detected some areas of high reflectivity that they say indicate bodies of liquid water trapped under more than one kilometer of Martian ice.’

The notion that liquid water could exist on Mars is an exciting one, making it a potential habitat for life. However, scientists believe that these lakes could be extremely salty which may prove problematic for sustaining life, just how salty these lakes are is unknown. Some lakes on Earth have reached a salt concentration of 40% and in Nature, environmental scientist John Priscu, noted that in Antarctica, there is not much life in the ‘briny pools’… ‘They’re just pickled’.

On the saltiness of the lakes, Dr. Roberto Orosei told BBC News, “This is a difficult question to answer, we do not know the thermodynamical conditions down there and we do not know the kinds of salts that are dissolved in the water if they are down there. We expect that water would be close to the saturation point (the stage at which no more salt can be dissolved), because as water stands there, it leaches through rocks and tends to dissolve every salt it meets… we’re talking about several tens of percent [of salt content in the lakes].”

There is still much debate surrounding the existence of these Martian lakes, predominantly around the presence of liquid water rather than ice. Scientists argue that there is a lack of a substantial heat source that would be able to turn the ice on Mars into water. Although this new data supports the 2018 finding that a lake is present, many are still concerned that what has been found may not be liquid water, instead either ice or some sort of slush. However, an upcoming Chinese mission, may be able to check these claims. The Tianwen-1 mission will reach Mars in February 2021 and deploy a rover onto the surface which will carry out some scientific experiments.

Ideas For A Socially Distanced Halloween At Home