Blog - Latest News
You are here: Home1 / News2 / Lifestyle News3 / Sleep Pattern Could Be Based On Your Chronotype 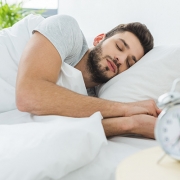 There are many of us who find getting up earlier in the morning and getting on with our day preferable to a lay in, and others who find keeping a morning routine a struggle but come alive in the evenings – often doing their best work. Science has long outlined these two different ‘chronotypes’ as: ‘morning larks’ and ‘night owls.’

Huffington Post writes: ‘morning chronotypes (or ‘larks’) tend to do better early in the morning, while evening chronotypes (‘owls’) seem to do better in the evening. Your chronotype is largely genetic, but environmental factors such as exposure to daylight, work schedules, and family life can also influence it.’ However, new research has now found that your chronotype may be more important than a simple preference, affecting sleep levels and productivity.

Researchers looked to a large ongoing study of people taking part in the Northern Finland Birth Cohort 1966 Study to look at how chronotypes affect people’s lives. The Northern Finland Birth Cohort consists of 12,000 people of which is a near 50/50 split between men and women and follows the lives of people born in 1966. At the age of 46, each participant was asked about various aspects of their lives – sleep patterns, overall health and their working life – those surveyed were divided into morning people, and evening people or intermediate.

IFL Science wrote: ‘most men were either M-type (46%) or intermediate (44%), with just 10% being E-type. Women were very similar, with 44% being M-type, 44% intermediate, and 12% E-type. The skew may be due to the age of the population, with older people often waking earlier than adolescents and young adults.’ Approximately 2,672 men and 3,159 women were surveyed, all of whom were in work in 2012 and monitored for the next four years. Monitoring showed who had stopped working and taken disability pension.

The information derived from the study suggested that ‘morning larks’ were likely to perform better in many different areas. Shorter sleep duration, insomnia, social jet lag were all common ailments of night owls, who were also more likely to be unmarried and out of work, the study showed. Previous studies have suggested that nightowls often exhibited poorer health when compared to morning larks, and this recent study seems to confirm that posit. Participants rated their work performance between 1 and 10 and according to IFL Science ‘evening owls were underperforming at work significantly more often than morning larks, with around 1 in 4 reporting work issues.’

Night Owls, do not usually fall asleep at a time where they can get the recommended 7+ hours of sleep which has a knock-on effect to productivity and overall health. Sleep specialists, scientists and health professionals alike have long underlined the importance of a good night’s sleep in a person’s overall health and cognitive function. A long-term or chronic lack of sleep can cause or exacerbate both physical ailments, mental health issues and generally affect all areas of one’s life.

IFL Science added to their report: ‘Genetic chronotypes continue to be difficult to uncover, with genome studies constantly revealing more genetic variants that contribute to being a morning or evening person. A large-scale study in 2019 discovered various areas of the genome thought to be involved, whilst other studies have highlighted 22 variants currently known to be linked, which are involved in circadian rhythms and photoreception (perceiving light). Chronotypes are thought to be heritable, which means if your parents love the morning sun, you may be in luck for your future work performance.’

The research, published in the journal Occupational & Environmental Medicine, concluded that ‘eveningness appears a previously unrecognized risk factor for poor WA and early disability. We suggest that individual chronotype be considered in attempts to lengthen work careers.’ This conclusion although fair, highlights how much of society and working life is set up for morning larks rather than night owls, which could be another factor as to why morning larks are seemingly performing better.