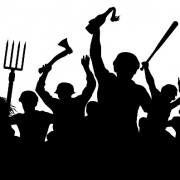 On Wednesday, January 6th 2020 congressman had gathered in the US Capitol building to certify the election results that would confirm Joe Biden as the next US President. A violent mob of Trump supporters, some of whom were armed, marched on the Capitol building, storming the building, clashing with officers, causing the deaths of five people and forcing lawmakers to shelter and hide. Donald Trump has been blamed by many for inciting and inspiring such violence. President Trump has spent weeks of claiming election fraud, arguing that he is the real victor in the presidential race. A claim that has been debunked many times over.

Many people have rightly highlighted the distinct disparity between the treatment of the Capitol Rioters and BLM protesters in 2020 following the murder of George Floyd. The same show of federal force was not presented to the largely white crowd that stormed the US Capitol and led to the death of five people, that was present in ‘controlling’ the protests regarding the treatment of black lives in 2020.

Many have complained about the media and influential figures initial rhetoric when describing or discussing the events. In some places the Capitol rioters were referred to in the tame language of ‘pro-Trump supporters’ and ‘protesters’ where BLM protests were referred to as ‘rioters’, ‘unamerican’ and so forth. The language used to describe each of the events has highlighted even more so the racial injustices and disparity facing our world.

‘I am so upset and exhausted right now at the news consistently referring to this mob at the Capitol as ‘protesters for Trump’, ‘supporters of Trump’, these are domestic terrorists and we need to call them as such. They are armed, they are dangerous, they are trying to take over the Capitol while a sitting vice president is in there trying to take over Congress. These are domestic terrorist acts and we need to call them as such. If these individuals were Middle Eastern, Muslim, Black, we would not be referring to them as protesters, supporters – they would be terrorists. And we need to make sure, just because these individuals are majority white, that we are not reframing this as something different. Because I am exhausted with every time a white male makes a domestic terrorist act, that the news and the police treat them differently. This is the same thing we are seeing here, none of us as American should be applauding this or be okay with what we are seeing. This is a domestic terrorist act and we need to call it and treat it as such.’

Discussing the use of the language in the aftermath of the George Floyd tragedy, Time reported that ‘At TIME’s request, the Oxford English Dictionary analyzed its corpus – including roughly 2,800 articles published between May 26 and June 2 – related to events that were spurred by the killing of George Floyd, to see how those events were being described in the media. Protest appeared most frequently, about seven times for every use of the word riot. But use of riot was widespread too, about 28 times more common than uprising and 175 times more common than rebellion.’ Astutely underlining the notion that the word riot is negative: ‘In general, the word riot connotes meaningless violence – drunken sports fans, frenzied consumers, people have lost touch with reason and given into baser instincts. But it also has a racial dimension in the U.S., as a term that’s long been used (by white people) to drum up the image of black people wreaking senseless chaos in cities.’

The comparison of the words ‘riot’ and ‘protest’ are distinctly powerful. One invites the notion of violence and chaos, the other a lawful exercising of one’s rights. The initial use of ‘protesters’ or ‘pro-trump supporters’ when referring to the Capitol rioters, who were armed and violent, demonstrates a distinct prejudice in the media’s and the public’s depiction of black lives and white lives.

Elle highlighted: ‘President Donald Trump responded to the movements with violent rhetoric – ‘when the looting starts, the shooting starts’ and referring to protesters as ‘criminals’ – and the National Guard was deployed along with a heavy police presence which carried and used batons, sprayed activists with tear gas and arrested journalists doing their job and reporting from the scene.’ Trump also referred to BLM protesters as “Thugs”. In comparison, Donald Trump referenced the Capitol Rioters on Twitter as “Twitter that the people involved in the riots Wednesday were “great patriots who have been badly & unfairly treated for so long” USA Today reported.

The rhetoric was mirrored in the response to the protesters. Where we once saw President Donald Trump disperse a crowd of peaceful BLM protesters with tear gas and rubber bullets, he has been accused of not deploying the National Guard as quickly when it came to violent acts in the capitol in comparison to the BLM protests.

The next President, Joe Biden said in a speech to the US nation on Thursday: “No one can tell me that if that had been a group of Black Lives Matter protesting yesterday, they wouldn’t have been treated very, very differently than the mob of thugs that stormed the Capitol.’ The upcoming Vice President, Kamala Harris commented on Twitter: ‘We have witnessed two systems of justice: one that let extremists storm the U.S. Capitol yesterday, and another that released tear gas on peaceful protestors last summer. It’s simply unacceptable.’