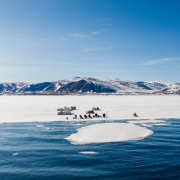 While confirmed cases of coronavirus continue to increase around the world you would be forgiven for believing that the illness is everywhere.

However there is one place that says there have been no cases of coronavirus – Nunavut in Canada.

When the rest of the world were deciding whether to close their borders to some, or all, nations back in March, those in charge in Nunavut made the decision that they would bring in some of the most stringent regulations, effectively stopping anyone who was not a resident access to the area.

Even those who do live in Nunavut had to abide by specific rules if they had visited the south, with those returning to the area being forced to spend 14 days in ‘isolation hubs’, hotels that the government paid for based in the cities of Edmonton, Yellowknife, Ottawa or Winnipeg.

But these hotel guests were not allowed to have a vacation as every hotel had security guards monitoring the guests 24/7 as well as nurses who were employed to ensure the well being of anyone in isolation was healthy. Anyone caught breaking the isolation rules have had the length of their stay increased meaning there has been people waiting to enter the hubs at times.

It may seem extreme but thanks to more than 7,000 residents staying in these hubs Nunavut is as yet to record its first case of coronavirus. And with infection rates starting to increase again the rules seem to be staying in place.

Dr Michael Patterson, the chief public health officer of Nunavut believes that these ‘fairly drastic’ regulations were implemented due to not only the challenges the Arctic region can face, but also the possibility that if allowed a bit of lax rules, the virus could take over the area.

The newest of Canada’s regions, Nunavut is surrounded by the Northwest Territories to the west and the Arctic Ocean in the north. And with an area of two million square kilometers – the equivalent to 809,000 square miles – there is a lot of space for the 36,000 residents to take up.

With ‘mind-boggling’ distances between the 25 communities that reside in the area, it could be claimed that the measures were not needed. The region – roughly three times the size of Texas – creates its own isolation at times with many areas only reachable by air.

However the figure of zero has been questioned after it was revealed that an outbreak had been discovered after workers who had flown into the area from a remote gold mine 100 miles away from the Arctic Circle had the infection. These cases have been included in the miners’ home regions meaning that the official number of cases in Nunavut remains at zero.

Whether these numbers should be included or not does not matter anyway as Dr Patterson says there is ‘almost no chance’ of the infections moving across the region as it has been months since there had been any form of travel to or from the mine.

Although the isolation can be seen as a good coping mechanism for keeping coronavirus out it has also brought problems with it. Due to the distance between communities those who do need a test have to have their tests flown out, as there is no ability to conduct any tests locally.

This has meant that many have had to wait around a week before their results have come back meaning if they had returned as positive “you’re really, really far behind by the time you can identify and respond.” The government is attempting to have testing times reduced to ensure a swift response if they do receive any positive tests.

As well as the difficulties in testing, there is also a lack of medical care to cope with an outbreak. The capital, Iqaluit, could potentially take in 20 coronavirus patients in their Qikiqtani General Hospital however Dr. Patterson believes that “those people who need treatment, or need admission, many of them will wind up having to go south and so that will be another load on our Medivac system.”

More than 80% of Nunavut is made up of Inuit communities and national advocacy group Inuit Tapiriit Kanatami believes that they are at danger of respiratory infections anyway, with tuberculosis rates over 300 times higher in Inuit communities than in non-indigenous Canadians.

With all these concerns in mind it is easy to see why Dr. Patterson is keen for the region to maintain the social distancing measures that are already in place, including the wearing of masks and limits on how many people can meet together at any one time.

However some regulations have been reduced since they were implemented earlier in the year. There are no longer any requirements for some Nunavummiut to isolate if they have traveled to the Northwest Territories, and those heading to Manitoba for medical treatment are also exempt from isolating on their return.