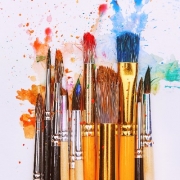 The infamous Banksy is an anonymous, secretive, street artist and political activist based in England who has been active since the 1990’s. His distinctive stencil graffiti art, often appeared mysteriously on urban walls and buildings, and often with a political or activist message attached. His art can also be found in public installations, film and canvas work. As he has rose in prominence, his work has been highly sought after, some of which selling for millions at art auctions, yet his identity still remains refreshingly unknown. Despite being highly-regarded, Banksy has not abandoned his messages, placing instalments and graffiti work in various locations. Recently, placing his street art in a London subway train shortly after the UK’s coronavirus nationwide lockdown began to lift. In October, one of Banksy’s older pieces from a 2005 series, was sold at a Sotheby’s Art Auction for £7.5 million.

The piece entitled ‘Show me the Monet’ takes Claude Monet’s famous impressionist water lilies, and reworks it, adding in sunken shopping trolleys and traffic cones under the Japanese Bridge, in a re-imagining that unpleasantly depicts a dumping site. A poignant piece that no doubt comments disparagingly on consumerism and humanities destruction and mistreatment of the natural world. The piece is part of a larger 2005 series titled ‘Crude Oil’ which takes canonical works from famous artists and re-envisages them in often critical, cynical or illuminating reflections of the modern world. The series includes Van Gogh’s famous ‘Sunflowers’ wilted and dead in their vase, entitled: ‘Sunflowers from Petrol Station’; and a reiteration of Andy Warhol’s ‘Campbell’s Soup’ which now sits instead as a supermarket value brand. Edward Hopper’s Nighthawks now sported an angry man, smashing the bar window, dressed in only his union jack underwear.

Various other pieces in the series show oil paintings of landscapes marred with Banksy’s additions of waste, litter and damage (and crude oil on the beach). ‘Show me the Monet’ was sold in London at a Sotheby’s Art Institute auction and was a nine-minute bid between five collectors, eventually selling for £7,551,600. Originally expected to sell for £3.5m and £5m but surpassing that prediction by a landslide.

Quoted in The Guardian, Alex Branczik, Sotheby’s European head of contemporary art, said: “In one of his most important paintings, Banksy has taken Monet’s iconic depiction of the Japanese bridge in the Impressionist master’s famous garden at Giverny and transformed it into a modern-day fly-tipping spot. More canal than idyllic lily pond, Banksy litters Monet’s composition with discarded shopping trollies and a fluorescent orange traffic cone. Ever prescient as a voice of protest and social dissent, here Banksy shines a light on society’s disregard for the environment in favor of the wasteful excesses of consumerism.”

This however, was not the most a Banksy pieces has gone for, last year, Banksy’s canvas painting ‘Devolved Parliament’ sold for just below £9.9 million, after it was expected to sell for £2 million. The painting depicted members of Parliament as chimpanzees, poignantly sold around the time of Britain’s Brexit debate. When the painting was sold, Banksy made a comment on his Instagram, ‘Record Price for a Banksy painting set at auction tonight. Shame I didn’t still own it.’ Accompanied by a quote from Robert Hughes Art Critic that read: ‘Art should make us feel more clearly and more intelligently. It should give us coherent sensations that we otherwise would not have had. But the price of a work of art is now part of its function, its new job is to sit on the wall and get more expensive. Instead of being the common property of humankind the way a book is, art becomes the particular property of somebody who can afford it. Suppose that every worthwhile book in the world cost $1million – imaging what a catastrophic effect on culture that would have.’

Banksy has been known to express views against the elitist bourgeoise of the art world, believing instead that the art belongs to the people. Although no comment has yet been made on the sale of ‘Show me the Monet,’ in another apparent protest against rich art collectors, when one of his trademark paintings ‘Girl with a Balloon’ sold at auction for $1.4 million in 2018, it was partially shredded by a remote-control mechanism on the back of the frame. Banksy put a video up on his Instagram of the event, stating that he built a shredder into the frame in case it ever went into auction. Accompanied by the caption: “The urge to destroy is also a creative urge – Picasso”

The One Place Coronavirus Forgot
Scroll to top