Blog - Latest News
You are here: Home1 / Around The Web2 / Science3 / The Science Is Extremely Clear: You Need to Prioritize Sleep 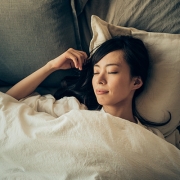 The more scientists learn about the slumbering brain, the more they realize how vital sleep actually is. Now some researchers hope to develop it into a form of medicine.

When I was in college, I informed my parents that they could stop hoping I would achieve anything close to greatness: I simply needed too much sleep. While President Barack Obama was up late sending emails and writing letters into the wee hours, and all my friends were telling me they could “sleep when they’re dead,” I was snoozing away critical hours.

Compared with giraffes, which zonk out for just 30 minutes a day, or dolphins, which rest only one-half of their brains at a time, I—who will gleefully luxuriate in nine hours of shut-eye now and then—am basically a lump who occasionally has wakeful moments.

Turns out I still might have a chance. “Sleep is so critical for so many parts of our body and our mind,” says Aric Prather, a sleep scientist at UCSF. It strengthens the immune system and helps regulate metabolism. It can clear out toxins that build up in the brain and prevent neurodegenerative diseases. “Sleep is like the dishwasher of the brain,” Prather explains in WIRED’s latest “Five Levels” video.