Blog - Latest News
You are here: Home1 / News2 / Lifestyle News3 / The UK Learns To Live Life By The ‘Rule of Six’ 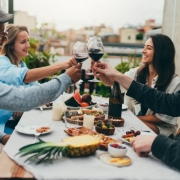 For the past few weeks the UK, alongside countries such as Spain and France, has started to see a notable rise in coronavirus cases. There is no denying that we have enjoyed getting back to some kind of normality which enabled us to once again return to the routines of school runs, commuting to the office and socializing in bars and restaurants.

However, this new found freedom has been short lived and reluctantly it appears that we now may be at a critical stage in the resurgence of the coronavirus pandemic in the UK. to try and prevent the worst from occurring, the UK government has introduced a rule of six and as of Monday 14th September due to the coronavirus alert level being raised to a level four, decided the appropriate course of action would be to ban gatherings with other households socially in groups of more than six people. This includes children and applies to meeting both indoors and outdoors.

After the first lockdown, the government is trying to take action much quicker whilst also setting simpler instructions for people to follow. The nation is now coming to terms with the fact that to protect everyone, the best option to try to control and limit the spread of the virus, The new rule of six will be enforced by impending fines starting at £100 ($127) and doubling per repeat offense, up to a maximum amount of £3,200 ($4,080). For large group gathering, the fine could be as much as £10,000 *($12,750).

This came as a step back, as the previous limits included a maximum of 30 people meeting either indoors and outdoors. During this time police exerted no powers to stop gatherings unless they exceeded 30.

It was on Tuesday 22nd September that the Prime Minister Boris Johnson, addressed the House of Commons to share his thoughts on how he would wish to proceed with these restrictions. He declared that we had reached a ‘perilous turning point’ before announcing further new measures. However the shock came at another figure that took many by surprise, that we might be living this way for the next six months.

These tougher measures have been in place as the government’s top advisors, Professor Chris Whitty, England’s chief medical officer and Sir Patrick Vallance, chief scientific adviser, have both come to the conclusion from analyzing all of the latest data regarding infection rates and predictions that it is necessary to take this action.

Boris Johnson addressed the UK at 8pm that evening holding a sterner tone to accommodate the seriousness of what was yet to come. He thanked the nation for their efforts in coming through the first lockdown and being able to suppress the virus but reminded viewers that we have not yet defeated it. Having anticipated a second wave, the current figures and the science behind the rate of infection mean that we need to act now.

He went on to reinforce the rule of six, so no gathering of more than six people made up of family and friends indoors and outdoors, including in social areas such as pubs or for indoor sporting activities. Pubs and restaurants as of Thursday 24th September will be legally required to close at 10pm, and the number of people to attend weddings has been cut from 30 people down to 15 with funerals still remaining at 30.

It has been declared that schools, education centers and workplaces will remain open as normal although workers have been asked to return to working from home if they are able to do so. The wearing of face coverings has now been extended to cover all staff working in retail, taxi drivers and passengers as well as hospitality services and in a hospitality setting unless seated at a table. The fines have now doubled to £200 if you are found not complying with the rules.

The PM also acknowledged that though we have been able to incorporate a return to sporting fixtures such as televised football, it will still be a long time before large audiences will be invited to watch.

To help manage this troublesome phase of the pandemic, a new app is set to be released in the UK to enable track, trace and testing more readily available. It is hoped that the app will make the system more accessible to people and help them to determine whether they need to request a test or to self isolate. Will this new app, which is currently viewed with skepticism by many, be the beacon to overcoming the virus until a vaccine can be created?

It has been a decision that has split a nation; partly wanting to conform to the rules in order to tackle the very real threat of the coronavirus spreading at a rapid rate in the coming weeks, but also the reluctance to accept that his may end up being our new lives for the next six months. Added to this is the pressures of contemplating a second full lockdown and for many, it is set to be a long hard winter.

And of course the question on many people’s minds and a cause for concern is Christmas; will we be able to meet as families by then and will this be the scare factor needed to induce widespread conformity? What is clear, is that we all need to work together to give the nation the best shot of controlling the rate of the infection, so we can begin to enjoy an albeit brief taster of our old pre-COVID-19 lives.