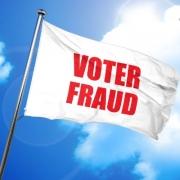 President Donald Trump has long been attempting to sow seeds of doubt over the legitimacy of vote-in mail in the 2020 election. Now, with Election Day over, Trump’s corruption claims grow louder and while a number of top Republicans have distanced themselves from this rhetoric, many have now chosen to defend Trump and his baseless stance.

Early vote totals showed Trump taking an early lead in a large number of states, but as mail-in votes started to be counted, votes for Biden increased and it soon became clear that the Democrat was the favorite to win the race. Trump took to social media to make further allegations of corruption and voter fraud, resulting in large numbers of Trump supporters to protest at polling stations across the country.

House GOP leader Kevin McCarthy of California refused to comment on the matter after a request from CNN, but in an interview with Fox News‘ Laura Ingraham he repeated the President’s fraud accusations and warned Americans everywhere to be on guard.

“Every American should stand up. Whatever they see … tell us if they see something that’s incorrect out there,” McCarthy said. He later added, “Do not be silent about this. We cannot allow this to happen before our very eyes.”

“What the President wants to make sure is that every legal vote is counted. The people vote up until Election Day, not the days after as others would have. That’s what the President refers to,” McCarthy said at a news conference Wednesday. “We want to make sure it’s legal, it’s fair, and that every legal vote is counted, and that’s what we’re working towards. But I don’t think people should vote after the election though.”

There has been no tangible evidence of voter fraud in the 2020 election but the Trump administration has nevertheless sent out a myriad of lawsuits against a number of different states. Some of these have attempted to cease voting completely, normally in the states that Trump took an early lead in, while some have already been thrown out by judges.

Sen. Lindsey Graham, a close ally of the President and chair of the Senate Judiciary Committee, defended Trump on Thursday evening and echoed his baseless claims of voter fraud. “I’m here tonight to stand with President Trump,” the South Carolina Republican, who was re-elected Tuesday, told Fox News’ Sean Hannity.

In the days following November 3, Trump has told allies close to him that even if his path to re-election is blocked by losses in key states such as Georgia and Pennsylvania, he will refuse to concede to Biden. CNN are reporting that Trump’s aides, including chief of staff Mark Meadows, have chosen not to try and bring Trump to terms with the fact that he will likely lose, instead allowing the burning of his baseless corruption claims to continue unchecked.

Senate Majority Leader Mitch McConnell’s office declined to comment to CNN on Trump’s remarks on Thursday evening. On Friday morning, McConnell tweeted, “Every legal vote should be counted.”
“Here’s how this must work in our great country: Every legal vote should be counted. Any illegally submitted ballots must not. All sides must get to observe the process. And the courts are here to apply the laws & resolve disputes. That’s how Americans’ votes decide the result,” he tweeted.

GOP Rep. Will Hurd of Texas, who is retiring at the end of his current term, suggested that the comments are “dangerous.”

“A sitting president undermining our political process & questioning the legality of the voices of countless Americans without evidence is not only dangerous & wrong, it undermines the very foundation this nation was built upon,” Hurd tweeted.

Republican Rep. Adam Kinzinger of Illinois also tweeted on the matter, “This is getting insane,” and said, “if you have legit concerns about fraud present EVIDENCE and take it to court.”

Those working closest to Trump have grown concerned that somebody will eventually have to face the discussion with Trump that his time in the White House is likely coming to an end, but it is not yet decided who will carry the task out. CNN sources claim it will potentially be Jared Kushner or Ivanka Trump.

“Under our Constitution, state legislatures set the rules and states administer our elections. We should respect that process and ensure that all ballots cast in accordance with state laws are counted. It’s that simple. I hope we can reach a final resolution as quickly as possible,” said Sen. Rob Portman, a Republican from Ohio.

“As we await all the results of the election, I urge everyone to be patient. Each state has different deadlines to receive ballots and a process in place to count those ballots,” he continued.

“It is critical that we give election officials time to complete their jobs, and that we ensure all lawfully cast ballots are allowed and counted. The results will be known when all those ballots are counted.”

Moderna Claims Their Coronavirus Vaccine Is 94.5% Effective, According To New...
Scroll to top