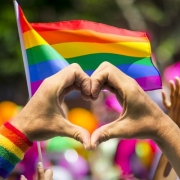 Following the news that Taiwan has been successful in ridding itself of coronavirus, the island saw tens of thousands of people gather together to celebrate gay pride.

Seen as one of the countries at the front of promoting gay rights in Asia, Taiwan allowed same-sex marriage in May 2019, the first in the area to do so, and was only two years after it had been ruled that it was illegal to class marriage as being only between two members of the opposite sex.

And with over 200 consecutive days of no local coronavirus infections minimum social distancing measures are required meaning not only could the country celebrate equality but they could do so without fear of illness. Taiwan has been able to maintain the spread of the virus and has only had 573 confirmed cases of the virus and seven deaths in a population of 24 million citizens.

In a year of continuing disheartening news it was a pleasure to see balloons and rainbow colored flags carried through the capital Taipei by those in attendance. One drag queen, Wu Po-sung, wore a handmade “wedding banquet” dress – in the country’s traditional marriage color of red – which also had table settings on it.

Speaking to AFP, Wu said, “Gay marriage is now in its second year. I was hoping to be able to attend all of my friends’ wedding banquets and that’s why I am dressed like a wedding banquet.”

Meanwhile others were full of praise for the way that Taiwan had handled both the pandemic and the rights of the gay community with Chen Wei-chun saying “Taiwan has done a fantastic job at both equality and pandemic control. That makes us proud.”

Taipei resident Eve Teo was also proud and said, “I feel that Taiwan has really set an example, to be able to have a normal life and also to continue with this Pride event even though the world is not able to come this year.”

The day before the parade saw two same-sex couple allowed to attend a mass wedding that was hosted by the military, highlighting another step forward in the gay rights campaign in the region.

Alongside 188 couples from Taiwan’s army, navy and air force that had gathered together to exchange vows were Yumi Meng and Major Wang Yi as well as Li Li-chen and Lieutenant Chen Ying-hsuan.

Since the law was put in place last year more than 4,000 couples have registered their same-sex marriages.

Although the traditional pride month is June many were unable to attend pride marches due to Covid-19 restrictions, however Taiwanese LGBT groups did hold a smaller march to show their support for the gay community.

According to estimates, more than 130,000 attended the 18th pride march, which was a decrease of around 70,000 from last year mainly due to international visitors being unable to head to Taiwan.

While some Asian countries have been noted for their anti-gay stance, Taiwan has had a flourishing LGBT community and next year will see them host Asia’s Gay Games.

However there has been resistance from religious groups on the island who do not approve of same-sex marriage while a high proportion of the elder generations have also fought against the move. Despite many voicing their displeasure at President Tsai Ing-wen putting forward the same-sex legislation last year, she went on to win a second term in a January election that was hugely in her favor. However while the law is in force it is still in its early stages as there are still some restrictions imposed on them, such as adoption, that heterosexual couples do not have to face. There is also a law that states that Taiwanese citizens are only allowed to marry someone from another country so long as that country has legalized same-sex marriage.

Chien Chi-chieh, the secretary-general of the Taiwan Alliance to Promote Civil Partnership Rights said, “Taiwan is Asia’s first, which means most of our neighboring countries do not recognize same-sex marriages.

“So, if a Taiwanese has a partner from South Korea, Japan, Hong Kong, China, Malaysia, Vietnam, Philippines, they all can’t get married. There’s a huge number of couples like that in Taiwan,” she added.

There are also some who believe the parade was a good step in educating the community about equality and LGBTQ issues. Chi Chia-wei has been actively campaigning since the 1980s for more education to be made available. “In schools, they don’t teach children that after same-sex marriage is passed, there will be a lot of LGBT families. They don’t let children understand this, and so there needs to be more effort to strengthen this.”

Cruises To Be Suspended For The Rest Of 2020