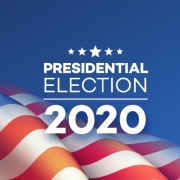 After the second presidential debate was cancelled after disagreements over its format, both candidates took to prime-time television to field questions and attempt to gain support ahead of the upcoming Election Day on November 3.

The debate was moved to a virtual setting following Trump’s Covid-19 diagnosis but the president refused to participate in a debate that was not face-to-face, claiming it was designed to protect his rival.

Instead, both Trump and Biden fielded questions from a moderator and audience members from both sides of the political spectrum in events held simultaneously on NBC and ABC, respectively.

“Wrong or not wrong, you have to understand, as President, I can’t be locked in a room someplace for the next year and just stay and do nothing. And every time I go into a crowd, I was with the parents of our fallen heroes,” Trump said when asked if it was wrong of him to refuse to wear a mask earlier in the year.

“These people are the most incredible people. And they came up to me and they would hug me, and they would touch me, and I’m not going to not let them do it, to be honest with you.”

Biden’s tune was slightly different on the topic of masks, highlighting their importance and claiming he would ask every governor to set a mandate for the wearing of masks in their state.

Biden claimed he was against the use of fines but indicated how vital it was to get the population wearing masks and receiving vaccinations when they are available.

“No matter whether they’re good, bad, or indifferent, the words of a president matter,” Biden said.

“And when a president doesn’t wear a mask or makes fun of folks like me, when I was wearing a mask for a long time, then people say, “Well, it mustn’t be that important.” But when a president says, “I think this is very important.” For example, I walked in here with this mask, but I have one of the N95 masks underneath it. I left it in my dressing room. Not the dresser, the room I was in before I got here.”

Biden gave calm answers when asked about policing and if he still believed that more police officers resulted in fewer crimes. Tough questions were also fielded by Biden from audience members on a Crime bill Biden signed in 1994 that has since been the subject of controversy.

“When we had community policing, from the mid-’90s on until Bush got elected, what happened? Violent crime actually went down precipitous. Remember the significant rise in violent crime that was occurring in the late ’80s into the ’90s. It went down and fewer African Americans were arrested because you had the requirement,” Biden said when asked about the potential defunding of police and how effective it might be.

“The cops didn’t like it. They didn’t like the community policing, because you had to have two people in the vehicle, they had to get out of their cars, they had to introduce themselves to who owns the local liquor store, who owned the local grocery store, who was the woman on the corner. And what they would do, George, they’d actually go and give people their phone numbers. A cop would give the phone number.”

While Biden gave a number of longer, seemingly well-thought-out responses, Trump’s event soon deteriorated into nothing short of an argument with moderator Savannah Guthrie, who was unforgiving in her questions when sensing a potential Trump slip-up.

Trump was also quick to take jabs at the rival Democratic Party, accusing them of spying on his campaign amongst a number of other things. The president also reiterated his belief that voter fraud was widespread due to mail-in voting and that there was already evidence of tampering against his campaign.

“But let me just tell you, they talk about the peaceful transfer, right? They spied on my campaign and they got caught. And they spied heavily, on my campaign. And they tried to take down a duly elected sitting president,” Trump said.

“And then, they talk about, “Will you accept a peaceful transfer?” And the answer is, yes, I will. But I want it to be an honest election. And so does everybody else. When I see thousands of ballots dumped in a garbage can, and they happen to have my name on it? I’m not happy about that.

“But it’s sort of ironic that you, and them, talk about the peaceful transfer when I spent three and a half years fighting off these maniacs. And now, it turns out, everything’s there. That they were the ones that dealt with Russia, and it’s too bad.

“Peaceful transfer, I absolutely want that. But ideally, I don’t want to transfer, because I want to win.”

Will The Pandemic Encourage More People To Switch To A Career in Tech?
Scroll to top