Blog - Latest News
You are here: Home1 / News2 / Technology News3 / Will The Pandemic Encourage More People To Switch To A Career in Tech? 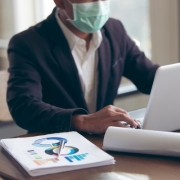 There is no denying that the pandemic has caused much disruption to businesses and jobs across the globe. Many of the freedoms of working that we once took for granted, such as the ability to perform to a live audience or setting up your own beauty salon at home are now wrapped in restrictions and uncertainty about the future. In fact, it has been reported that the arts & entertainment sector has been one of the worst sectors affected by the pandemic, with some still out of work since lockdown was first announced in March.

Clearly there will be a significant number of people who will need to reconsider their work options, at least in the short term, if their previous career option has become untenable. Whilst this is practical and realistic advice, it can be a real blow to those who have invested their energy, time and money into their career and perhaps had to make significant sacrifices in order to get where they are. Such discussions and encouragement around a career move should be approached empathetically, understanding that it is a fairly life changing decision for some and one that does not come from a place of willing.

Recently, the UK government released an advert which was designed to encourage people within the arts sector to consider retraining to a career in technology. It had the picture of a ballet dancer tying her shoes on the front with the words, “Fatima’s next job could be in cyber (she just doesn’t know it yet) Rethink, Reskill Reboot”. Whilst you can see the intention behind the advert, it wasn’t received well. The campaign received much criticism from the arts sector and beyond, with some describing it as ‘patronizing’ and ‘clearly showing the lack of support for the arts sector’.

The government was quick to distance itself from the messages contained within the advert, and it was instead attributed to CyberFirst, a programme led by the National Cyber Security Centre to encourage young people to consider careers in the tech sector. It was part of a long-standing programme to promote STEM (Science, Technology, Engineering and Maths) to the younger generation as it has been widely recognized that there is a shortage of new talent moving into these positions.

What is clear is that the pandemic has led to a greater awareness of the digital economy and the importance it plays in our future. From the development of vaccines, to the building of COVID-apps, to the expansion of cloud-based services to enable businesses to operate virtually, there are many areas which have flourished as a result of the pandemic. In fact, reports suggest that jobs in the tech sector have grown by 36% since the lockdown peak, according to the government’s Digital Economy Council. They revealed that software developers were within the five most advertised roles in many UK cities. The demand for people with cloud skills has increased by 22%, cyber skills increased by 22% and jobs requiring skills in artificial intelligence (AI) grew by 44%.

One common misconception is that STEM jobs require a certain type of person, perhaps one who is very technically minded and enjoys subjects like complex maths and physics. John Michaelis, an AI consultant and author of You ++ argues that people do not just need digital skills when it comes to considering a career in tech and that a great many other attributes are beneficial. In an open letter to the UK government on his LinkedIn profile, Mr. Michaelis said, “[people] need to be more aware of, and use their personal attributes, emotional intelligence, empathy, critical thinking, abstract thinking and creativity. It is using these skills that will lead to financial and personal fulfilment in the future.”

Mr Michaelis also believes that the pandemic has brought into sharp contrast the skills deficit we have in society. He went on to say, “I passionately believe that skills development is a critical issue. The current institutional approach to developing the curriculum and course content has become irrelevant. We need skills to equip people for the future; therefore, we need people developing the curriculum who are already “living the future.”

Whilst for many, the prospect of starting an entirely new career is extremely daunting, comfort can be taken from the fact that there are a huge variety of jobs within the tech sector which can utilise existing skills in ways you never thought possible. From a professional game tester through to a ‘Chief Listening Officer’ (yes this is actually a job), the possibilities really are endless once you start looking. And as we continue to move towards an ever-more digitalized society, more innovative and previously unheard of jobs will emerge, presenting the workforce with a completely new set of career options.