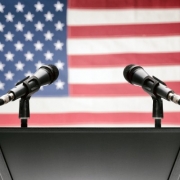 Just days from being released from the hospital after receiving treatment for Covid-19, President Donald Trump has refused to participate in a virtual debate against Democratic rival Joe Biden. The debate organizing committee has said that the October 15 debate will have to take place remotely.

The decision was made by the committee because of Trump’s admittance into hospital for Covid-19, but the president has said he will not waste his time on a move that he claims has been designed to help ‘protect’ his rival Biden.

Biden and his campaign team responded, arguing that Trump was simply attempting to escape accountability for ‘failures on Covid and the economy’.

Both sides have now agreed to postpone the second presidential debate until October 22, but it is not yet known what format it will take. The first presidential debate garnered mass criticism after descending into a series of hard-to-watch interruptions and criticisms and undecided voters will be hoping the two candidates offer a more coherent and informed debate next time around.

Meanwhile, the first and only vice-presidential debate was a much more civilised affair, with Mike Pence and Kamala Harris mainly clashing over the coronavirus pandemic and the Trump administration’s handling of it.

Although Trump has not exhibited symptoms for a couple of days, questions are still being asked of when he first became infected and thus if he still remains contagious. Even though the names of many of the people who came into contact with the president are now known, it is still not clear how many White House employees or visitors have been exposed.

The White House has now introduced new Covid-19 safety measures and protocol. Senate majority leader and top Republican Mitch McConnell said last week that he has purposely avoided the White House since the beginning of August because their approach to Covid safety measures, social distancing and masks differed from his and what he ‘suggested we do in the Senate’.

A White House gathering on September 26 to announce Trump’s Supreme Court choice has now been dubbed a ‘super-spreader’ event, with several attendees since having tested positive.

“No, I’m not going to waste my time on a virtual debate. That’s not what debating’s all about.

You sit behind a computer and do a debate. It’s ridiculous. And then they cut you off whenever they want. I have a host who I always thought was a nice guy, but I see is a never Trumper. You know, it came out that he’s a never Trumper. And we do have some of them Maria, believe it or not, because they don’t like to win. And so, I’m not doing, I’m not doing a virtual debate,” President Trump said during an interview with Fox.

“They called up two minutes ago and it was announced and they’re trying to protect Biden.

Everybody is. Like that NBC disaster, where he went on the show with Lester Holt. It was like, it was meant for a child. It wasn’t meant for a grown person. He gets up and he says, “We’re not fracking. We’re not fracking.” He was fracking for six months. He was fracking. He was raising his very thin hand and he was fracking. And now all of a sudden, he’s not fracking. Well tell the Pennsylvania people that you’re going, it’s ridiculous. He said, he’s not fracking. That’s all he said. And then all of a sudden, he goes to a fracking mode. And how about her? She committed her life to it. And all of a sudden she’s a fracker. She’s a big fracker. They going to stop fracking the minute they get into office, they’re lying to everybody. They’re lying about so many different things, but you have to confront them people, you can’t do it over a computer.

“There’s nothing wrong. I had a case, I got it knocked out. I think it was Regeneron that was responsible for it. Because of that, it was sort of like almost a gift from heaven because of what I went through and I felt pretty lousy. A lot of people did. A lot of people do.

“No matter how good the security, you’re not going to protect yourself from this thing with just your standard anything, unless you just literally don’t come out and even those people found out. Did you see in New York City, the most heavily locked down place, the people that caught it the most were the people that were caught in their houses and their apartments.”