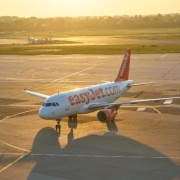 The coronavirus pandemic continues to make its way around the world and has taken many victims with it including economies, citizens, presidents and prime ministers.

The latest victim is British budget airline easyJet who have announced they are expecting to make a £845 million ($1,092m) loss this year. The loss would be the first made by the airline in their 25-year history.

And with the news that countries around the world are experiencing a ‘second wave’ – including their home country which has seen figures climb back up to around 17,540 confirmed cases a day. At the time of writing the UK has seen 561,815 cases while there has been 42,592 deaths – the expectations for the travel and aviation industry in 2021 are continuing to look dire.

A report from Sky News confirmed that the company, founded in 1995 by Sir Stelios Haji-Ioannou before becoming the easyGroup conglomerate, had already alerted the UK government that the company could potentially require more support to enable them to continue trading, especially as airline schedules around the world continue to be reduced.

The airline had already secured a loan in April from the Bank of England’s Coronavirus Corporate Financing Facility to the value of £600 million ($776m) as well as raising £608 million ($786m) through leasing and selling sections of its fleet while shareholders were able to raise a further £419 million ($542m).

Speaking about the aviation industry’s need for more support easyJet’s chief executive Johan Lundgren said, “At the beginning of this year, no one could have imagined the impact the pandemic has had on the industry.

“Aviation continues to face the most severe threat in its history and the UK government urgently needs to step up with a bespoke package of measures to ensure airlines are able to support economic recovery when it comes.”

Lundgren continued, “easyJet came into this crisis in a very strong position thanks to its strong balance sheet and consistent profitability. This year will be the first time in its history that easyJet has ever made a full-year loss”.

Travel restrictions within the EU – easyJet’s biggest market – are still in place with 65% of routes still seeing restrictions at the end of September.

And with the UK’s government seemingly changing their ‘safe list’ each week, airlines are struggling to put plans together for future routes.

The airline produced information that clearly showed how the numbers of people choosing to fly peaked in August, a month that saw the UK government encourage people to get out and put money back into their struggling economy. As well as lifting travel restrictions on many destinations they also backed an ‘eat out to help out’ scheme to encourage diners to go back to restaurants and bars. The subsequent increase in coronavirus cases in September has left many wondering whether this was the right thing to do and businesses are again struggling as restrictions are being put back in place.

easyJet has also demanded the government looks at how they can start getting people back into the air and have joined airlines including Virgin Atlantic, Lufthansa, United, American and International Airlines Group in asking for support. Some suggestions have included Covid test being taken at the airport or specific air bridges between cities such as New York and London.

And their requests seem to have worked. This week the UK’s Department for Transport announced they would be putting a new Global Travel Taskforce together which will work with travel industry leaders to implement new procedures that could see a reduction to the current 14-day quarantine rules that many travelers have to comply with.

However the announcement has not been welcomed as warmly as the government had hoped. Virgin Atlantic, a company that has seen different arms of their organization suffer, require financial help or close down, has said that while they are happy with the news it was important to remember that ‘every day counts’, a response to the task force already admitting they did not have a time frame in place for any procedures to be introduced.

While the government appears to want to take its time in how they will handle any new moves, unemployment in the aviation industry is continuing to increase. Following United Airlines’ recent announcement that 12,000 of their staff would be furloughed, Manchester Airports Group – who has hubs at East Midlands, Manchester and London Stansted airport – has announced that they would be cutting their payroll by 900 personnel.

easyJet has already reduced their job count by 4,500 and they have admitted they cannot rule out the possibility of more people losing their jobs.

So far they have carried out redundancy consultations with their UK cabin crew and pilots as well as their administration and management personnel, however they are still in negotiations with any staff that are based in Switzerland, Germany or Portugal.