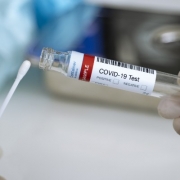 The start of a new pilot testing strategy to tackle the surging cases of COVID-19 in the UK has begun in the city of Liverpool, as mass testing gets underway supported by a strong military effort.

Liverpool has a population of just under 500,000 and according to the Liverpool City Council website, the weekly rate of Covid-19 in Liverpool is 317.2 per 100,000 population, with the latest positivity testing rate* is 13.7%. It is thought to have one of the highest rates of COVID-19 cases in England. Prior to the national lockdown which came into effect on Thursday 5th November, Liverpool had moved into Tier 3, which represented ‘a very high risk’ of transmission in the area. At the time, this was the highest level of restrictions that could be imposed in the UK and reflected the growing numbers of coronavirus cases in and around the area.

The prominence of COVID-19 in the Liverpool area means that it is a prime testing ground to trial a new approach to mass testing. Under the new initiative, everyone in the city will be offered the chance to have a COVID-19 test and the operation is being supported by 2,000 military personnel across 85 new testing centers around the city. In what is clearly a challenging but surmountable effort, the success of this approach will largely influence how and if a similar approach can be effectively rolled out across the rest of the country.

By testing the whole city, it is hoped that a much clearer picture will be presented in regards to who actually has the virus and therefore, who needs to isolate. As we know, many people can be infected with the virus yet display no symptoms and are therefore unwittingly contributing to it’s continued spread. Until now, the advice has been to only seek out a test if you have clear COVID-19 symptoms, such as a persistent cough, high temperature and loss of taste or smell. This means many undetected cases are continuing to go about their daily lives unaware that they are contagious. This move goes some way to suggesting that the government realizes that restricting movements of those who display symptoms is only tackling part of the problem. They also have very little data on how many people are asymptomatic, so this will be extremely useful in revealing more about the dispersal of this devastating new virus amongst the general population.

At the time of writing, further details of the program were still being unveiled, but it is assumed that at this stage residents will be invited to attend a test center in order to undertake a test. There will also be home-testing kits made available and testing will take place within hospitals. It doesn’t appear that this will be enforced in any way or that residents will be legally obliged to attend. This does post the risk that a large number of people will simply refuse to attend and get tested. This could be out of worry over the results, both from a health perspective and because they would have to stop working and self isolate, or because they are synics of the pandemic in general. As we already know the general population numbers in Liverpool, it will quickly become clear just what percentage of the local community have indeed come forward for testing.

The pilot is expected to last around 10 days but may be extended and if successful, it could provide a real route out of the current lockdown scenario. At present and without a suitable vaccine available, the UK is likely to keep bouncing in and out of lockdown as numbers rise. The latest national lockdown was brought in only when the numbers revealed that the virus trajectory was leading towards hospitals being overwhelmed by Christmas. Cases, hospitalizations and deaths have all been increasing significantly in the past month and so this latest ‘circuit breaker’ is designed to try and relieve the pressure and put a temporary halt to the transmissions. But I don’t think anyone is under any illusions that once the national lockdown ends and the previous tiered system comes back into play, the numbers will simply start to rise once again.

Provided that it can be handled logistically, mass testing could ensure that cities can start to resume business by identifying everyone who has the virus, whether they display symptoms or not. By isolating everyone with the active virus, this should mean that transmission levels decrease dramatically, bringing the ‘R’ rate to below 1. It is only by doing so that the UK can hope to reduce spread within communities and avoid having to enter multiple lockdowns over the coming year until such a time as there is a suitable vaccine.