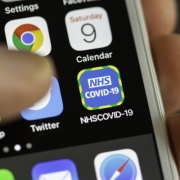 On Thursday, the 24th of September, the UK government finally released their test and trace app, called ‘NHS COVID-19’. Using the Apple – Google designed software, the decentralized system will alert users if they have been in contact or proximity with someone who has developed SARS-CoV- 2. The UK government initially pursued its own software but after several technical issues, that included smartphone compatibility, moved to the Apple – Google model. The app was due to be released months ago but after these problems and changes it only began its final public trial in August. Now, however, the app has been approved and is being rolled out nationwide. The government and National Health Service (NHS) are urging UK residents to download and use the app, as its effectiveness will increase with the more people that use it.

The NHS COVID-19 app is available to users aged 16 and over. It utilizes Bluetooth signals, in the background, to detect other app users whilst the smart phone owner goes about their daily life. If a user falls ill with a disease, they will update the status and anonymized alerts will be sent to anyone that they have come into contact with. These people will be advised to self-isolate – although as the alerts are anonymous, this self-isolation is not mandatory nor enforceable unlike the manual test and trace scheme that currently in place. The anonymized data means that the person who has fallen ill will not be identified and those that have been asked to isolate will also not be identified.

Speaking to BBC Radio 4, Health Secretary Matt Hancock stated that the app: “helps us to find more people who are at risk of having the virus that human contact tracers are unable to find… Everybody who downloads the app will be helping to protect themselves, helping to protect their loved ones, helping to protect their community because the more people who download it, the more effective it will be.” Indeed, as the application detects those within a two-meter proximity to other users it should be able to pick up on people that the user does not know. Further, manual test and tracing takes manpower and time, and replacing this with a digital method will mean that near instantaneous alerts can be sent out to those that have been exposed.

The app also features a venue check-in function and informs users of the risk level of the area that they are in. It also allows you to check symptoms, read the latest advice and features an isolation countdown – should the user be advised to isolate. The app also allows users to order a coronavirus test. The venue check in function will be enforced by the government, and businesses such as pubs and restaurants will be asked to display an official test and trace poster featuring the QR barcode. Those establishments that fail to do so will face fines of up to £1,000. The idea being, that a user can scan the QR code upon entry and should a venue be at the center of a small outbreak, the app can send alerts to all those that have visited advising self-isolation or a coronavirus test.

The postcode-based indicators should allow people to regularly check on what risk level their local area is at. Major mobile network providers have also made sure the app is free to use, and will not deduct data for accessing the app. Updates have insured that the app is available in multiple languages, and domestic abuse survivors can delete check-ins from the app should their phone be searched by their abuser. Those that have been advised self-isolate may be able to call the NHS hotline to override the command if they do not have the virus, however this feature is not yet confirmed. The struggle facing the UK will be if enough residents do not download and use the app, if the vast majority of the country does not access the app then the contact tracing element will be made less effective.

However, not only are there concerns that the apps data privacy may deter some users, or that only a minority of the population will download the app, but perhaps larger than this, the UK is currently facing test shortages. If users are unable to access a coronavirus test quickly, it will make the process labored and somewhat ineffective. For example, if one person contracts the virus but is unable to get tested or faces weeks of delays to access said test, those that have been exposed may unknowingly develop the virus as well and spread it on, rather than being immediately informed, isolating and accessing a test themselves. Those that have been in contact may receive notifications weeks after the fact at a point where it is almost redundant.

Soccer Superstar Returns To The EPL