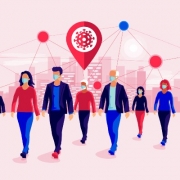 As we enter into the final months of 2020, it is fair to say that the coronavirus pandemic has dominated the majority of the year. Throughout that time, once-disused terms have been draped with the connotation of ‘the coronavirus’ and promoted into regular conversation – social distancing, high-risk, test-and-trace, herd immunity, self-quarantine, flattening the curve, incubation, isolation, super spreader and so forth. It seems that the further we get into the pandemic the more terms are adopted into our vocabulary. One of the latest, is the notion of a ‘circuit breaker’, which has recently been knocking around the UK as scientific advisors urge the government to consider this strategy.

A ‘circuit breaker’ is a set of tight restrictions similar to a lockdown over a short and limited time period. Designed to quickly reduce the transmission of COVID-19 and therefore reign in and reverse the spread of the virus. A circuit breaker would be introduced as cases rise and before the need for a full nationwide lockdown, it could therefore save thousands of lives and relieve pressure on hospitals, whilst reducing transmission. Further, due to the shorter and definite period of restriction, it would hopefully protect the economy better than a full and indefinite lockdown. In regards to the coronavirus, the minimum duration of a circuit breaker would be approximately two weeks, although it could be longer depending on advice in the area.

Countries such as Israel, have used the circuit breaker method as their original ‘traffic light system’ failed to slow the spread. Although not called a ‘circuit breaker’ New Zealand have enforced a temporary lockdown, which allowed contact tracers to regain control of the outbreak. Singapore also used circuit breakers earlier in the year, when Prime Minister Lee Hsien Loong enforced a month-long circuit breaker in early April (which was later extended as cases still rose), stating: “We have decided that instead of tightening incrementally over the next few weeks, we should make a decisive move now to pre-empt escalating infections”. Each country has had a differing level of success with the circuit breaker, whilst New Zealand has been praised for its response, Israel is apparently only seeing ‘preliminary signs of success.’

Although different countries impose slightly different regulations, the general idea for a circuit breaker, is that all non-essential businesses close, people stay in their homes unless for essential errands such as food shopping and social activities, and seeing people outside of your household would be temporarily banned. The UK government has recently been urged by scientists and other politicians to impose this method. Supporters of the method suggest that the use of a circuit breaker would allow the level of infection to reset, help the National Health Service better cope and give time for test and trace systems to catch up. The BBC reported: ‘Instead of the epidemic powering ahead, it would be thrown into reverse. The [UK Government’s] Scientific Advisory Group for Emergencies (Sage) estimates it could rewind the clock by 28 days.’ According to various sources Sage have been pushing for the UK to enforce a circuit breaker for three weeks, as cases have been rising exponentially.

According to Sky News, in the UK ‘A modelling paper written by Professor Graham Medley and colleagues sets out that deaths could possibly reduce for the rest of the year from about 19,900 to 12,100. Hospital admissions could be reduced from 132,400 to 66,500.’

Professor Graham Medley also suggested that a short lockdown, with a viable end date, would also be healthier for businesses and people’s mental health, as they will know how long restrictions would last and could more easily adapt to that. For the UK, scientific advisors suggested that the circuit breaker be imposed to coincide with the annual October school break, known as ‘half-term’, beginning on the 24th of October. The aforementioned paper stated: “there are no good epidemiological reasons to delay the break as this will simply push back any beneﬁts until later, leaving more time for additional cases to accumulate.”