Blog - Latest News
You are here: Home1 / News2 / Entertainment News3 / Who Were the Biggest Winners At This Year’s Primetime Emmy Awards? 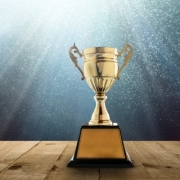 One of the biggest nights of the TV and film calendar is the Primetime Emmy Awards and this year was no exception. Despite the large scale in-person event being cancelled due to ongoing coronavirus restrictions, many of the world’s biggest stars donned their finery for the 72nd Annual celebration and took part in the replacement digital ceremony, christened ‘The Pandemmys’. Even though it was far from the traditional evening, the event celebrated the best in TV and film, crowning some of the most exciting talents alongside some of the most recognizable celebs.

Whilst the vast majority of the guests and nominees tuned in from their homes to participate and deliver their acceptance speeches, the ceremony was presented from The Staples Center by Jimmy Kimmel in Los Angeles where instead of an eager audience the only other people in the venue were a few guest presenters and celebrity cardboard cut-outs that filled the empty seats. Despite this, it remained an exciting evening. Alongside the awards successes, fans were surprised and delighted to see an unexpected mini Friends reunion as Jennifer Aniston, Courtney Cox and Lisa Kudrow were all together at home.

Another series that swept the awards, this time in the drama categories, was Succession. Succession was a winner in the categories of Outstanding Drama Series, Lead Actor in a Drama Series, Writing for a Drama Series and Directing for a Drama Series. “Succession follows a dysfunctional American global-media family” as described by IMDB. The winner in the writing category was the show’s British creator Jesse Armstrong commented “This is such a very nice moment,” and added “But it’s sad not to be with the cast and crew to share it.” as reported by the BBC. Furthermore, he also added a list of what he called “un-thank you’s” as part of his acceptance speech that mentioned both the US President Donald Trump and the UK Prime Minister Boris Johnson and was critical of their handling of the coronavirus pandemic, reported The Guardian.

It was also a brilliant night for 24 year old actress Zendaya, who scooped up the award for Lead Actress in a Drama Story for her portrayal of Rue Bennett in Euphoria. Euphoria is “A look at life for a group of high school students as they grapple with issues of drugs, sex and violence” as described by IMDB. In the year of the first digital awards ceremony, Zendaya’s win was another first as she is the youngest actress to ever win in this category. Within her category, Zendaya fought off intense competition from seasoned award winners including Jennifer Aniston for The Morning Show, both Jodie Comer and Sandra Oh for Killing Eve, Olivia Coleman for The Crown and Laura Linney for Ozark. “I know this feels like a really weird time to be celebrating,” Zendaya remarked; “But I just want to say there is hope in the young people out there – I know that our TV show doesn’t always feel like a great example of that – but there is hope in our young people and I just want to say to all my peers out there doing the work in the streets, ‘I see you, I admire you, I thank you.'” she added.

In spite of the circumstances, this year’s Primetime Emmys did not disappoint and provided many memorable moments while celebrating the prowess of the TV and film industry.

Early Rift Between Brady and Arians?

How Was The First Global Vaccine Discovered?
Scroll to top