Blog - Latest News
You are here: Home1 / News2 / Travel News3 / Will Thanksgiving Be The Latest Event To Be Canceled? 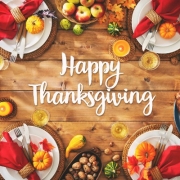 With Thanksgiving fast approaching many of us are looking forward to a break in our routine, a chance to escape and catch up with loved ones and to be thankful for what we have.

However there is growing concern that despite the supply and demand being there, the two may not meet due to both coronavirus fears and restrictions.

Figures recently released by travel data company OAG shows that November bookings for American Airlines and United Airlines are only reaching around 25 per cent compared to bookings for the same time in 2019. Delta Air Lines are also struggling with only 12% of 2019’s numbers.

Senior analyst John Grant confirmed the numbers saying, “It looks like the last hope of the year, Thanksgiving, will be memorable this year for all the wrong reasons.”

The news could not come at a worse time for those in the travel industry – or those actually wanting to use the services. Part of the CARES Act – the federal coronavirus aid packages that many airlines received earlier in the year – included minimum air-service rules however all funds finished on 30 September and airlines are now allowed to stop routes to certain destinations if they feel they are not financially viable.

This move has already commenced with JetBlue Airways indefinitely suspending flights to Ontario as well as many others. Delta Airlines has also suspended flights while American Airlines has suspended some of their routes to smaller areas such as Del Rio, Texas (DRT) and Lake Charles in Louisiana (LCH).

Other airlines including United and Southwest Airlines have also confirmed that they could be forced to suspend less profitable flights although which flights these are is yet to be announced.

The reduction in flights had been expected since airlines started furloughing their staff with over 40,000 employees either furloughed or laid off since the CARES Act finished. A new federal relief package was expected however Congress was unable to come to an agreement on how the package would be before the deadline.

Many domestic schedules for November were announced and although expected, the number of flights dropped was still a surprise, with some airlines cutting schedules down to 38%. In fact United and American saw the most changes with United falling by around 58 points to down 50% however American fell by 52 points to 44%. Southwest also reduced its flying, dropping by 30 points to down 38%.

Although Delta has yet to make their announcements they have already indicated that they will only be flying around 30% of its 2019 schedule, however travelers are still waiting to hear which flights will and will not be taking off.

When the pandemic first hit in the beginning of the year many experts would have been hard pressed to believe airlines would still be affected come the winter season, however as the spread of the virus across America has continued to grow with no clear direction of how to reduce or contain the virus, it soon became clear that the winter travel season would be severely affected.

Many of the flights booked during this period are by business travelers who travel more during the off peak season while leisure travelers tend to have a lull after Labor Day. The season then has peaks and troughs until spring – thanks to Thanksgiving and the Christmas period – when vacationers start to head off for their breaks.

However with more and more employees working from home corporate travel is at an all time low. And with job losses at an all time high many are unable to afford the luxury of a vacation.

It was this issue that was brought to the attention of Congress as both labor unions and airlines fought for extra federal aid, the belief being that if the government could help them get through the winter hopefully next year’s travel will be back to higher levels of booking – especially if there is a vaccine for covid-19.

However many are predicting that the airline industry will take far longer to recover than first expected. Both the International Air Transport Association (IATA) and Airlines for America (A4A) – both unaffiliated trade groups – have confirmed they believe it could take around four years before the industry fully recovers from the losses of 2020.

Alexandre de Juniac, director general for IATA spoke about the upcoming winter months and said the “outlook has actually gotten darker – something I would not have believed possible just a few months ago.”

There is some glimmer of positivity for some though. As the airports will be emptier this Thanksgiving those flying will be able to move around more freely and, hopefully, keeping any further cases of coronavirus from spreading. However the airlines are still hoping that there will be an increase in demand nearer the date with many booking last minute deals to get them home to their families.

A spokesman for booking site Kayak confirmed this theory stating that, “when looking at travel searches leading into the summer holidays (Memorial Day, July Fourth and Labor Day), Kayak saw travel interest start to pick up about 40 days in advance but didn’t actually peak until one day prior. If we use that same logic heading into the winter holidays, we expect to see travel interest start picking up the week of October 19 and peak much closer to the holidays.”