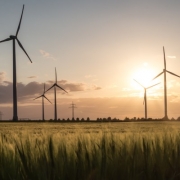 Despite being a relatively well-known concept, the coronavirus pandemic has starkly underlined humanities problematic relationship with the climate and natural world. As many countries went into nationwide lockdown, the world saw a temporary but significant drop in carbon emissions and many hoped to build on this reduction to work towards a carbon neutral future. Using the devastation of the coronavirus pandemic as a catalyst for real green growth and change. The current UK government had originally set out plans to become carbon zero by 2050, which for many was too late. However, in a new announcement regarding the UK’s green economic recovery, the Prime Minister has committed to accelerating offshore wind by 2030. This is one of many more announcements on a green recovery expected this year.

In a recent speech, at the Conservative party conference, Britain’s Prime Minister Boris Johnson announced that the government will invest in clean energy to create hundreds of thousands of jobs in the next decade. Pledging that £160m will be dedicated to building wind turbines to help the country ‘build back greener’. It will create 2000 jobs in construction and support 60,000 more, by upgrading ports and factories to build the turbines. He announced that “we believe that in 10 years’ time offshore wind will be powering every home in the country, with our target rising from 30 gigawatts to 40 gigawatts. “Your kettle, your washing machine, your cooker, your heating, your plug-in electric vehicle – the whole lot of them will get their juice cleanly and without guilt from the breezes that blow around these islands.”

In Boris Johnson’s speech, he said the UK would become “the world leader in clean wind energy” and perhaps also in its further green recovery plans. Members of Parliament have begun with wind, as it is a limitless resource on the island that is Britain. Plans included to employ new floating offshore technology, whereby large farms could be placed further out to sea, utilising the strong sea gales directly – both boosting capacity and not monopolizing land space. The Guardian reported: ‘No 10 said the pledge was the first step in a 10-point “Build Back Greener” plan, which the prime minister would set out later in the year and includes new targets and investment into industries, innovation and infrastructure.’ Outlining that it was expected that the government would next look to accelerate the move to electric vehicles, which if it did so by 2030 it would overtake plans set out by other European countries.

The UK’s government website has outlined the following commitments:

‘Confirming offshore wind will produce more than enough electricity to power every home in the country by 2030, based on current electricity usage, boosting the government’s previous 30GW target to 40GW.’

‘Creating a new target for floating offshore wind to deliver 1GW of energy by 2030, which is over 15 times the current volumes worldwide. Building on the strengths of our North Sea, this brand new technology allows wind farms to be built further out to sea in deeper waters, boosting capacity even further where winds are strongest and ensuring the UK remains at the forefront of the next generation of clean energy.’

‘Setting a target to support up to double the capacity of renewable energy in the next Contracts for Difference auction, which will open in late 2021 – providing enough clean, low cost energy to power up to 10 million homes.’

Prior to this announcement, climate activists and organizations have been urging world governments to include climate change concerns in their economic recoveries. Organizations such as The International Energy Agency set out a sustainable energy plan that provided a blueprint on how governments could encourage economic growth with climate change in mind, by moving towards areas such as clean energy and creating jobs within this area. In the UK’s economic recovery plan, the government focused on infrastructure rolling out a scheme that allowed homeowners to access a grant that would enable them to upgrade their homes with energy-saving improvements such as insulation, double glazing, heat pumps.

Reported in The Guardian, executive director of the environmental NGO Greenpeace UK, John Sauven, commented: “If carried through, [the commitment] would help cement the UK’s global leadership in this key technology. But delivering 40 gigawatts of power on to the grid by 2030 requires action in this parliament. We now need to see the prime minister’s newly found enthusiasm is followed through by knocking down all the barriers that the offshore wind industry faces in delivering its ambition.”

From Herd Immunity To Vaccinations, Predictions on Overcoming The COVID-19 ...