Blog - Latest News
You are here: Home1 / News2 / Lifestyle News3 / Concerns Growing For Families Living in Poverty During The Pandemic 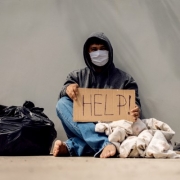 As the COVID-19 pandemic continues to gain momentum in what many experts are calling the second wave, fears are growing for the alarming number of families who are living in poverty.

When you think of children living in poverty, you may find your mind takes you to the well known fundraising adverts that you see so frequently on TV. But child poverty is not just something that happens in third world countries, it’s taking place right on your doorstep.

Consider the fact that the economy has not been able to function on all cylinders since March. Many low income families rely on wages generated from the areas which have been most affected by the pandemic, such as hospitality, leisure and entertainment. In addition, many of those workers who have retained their jobs have found that they are earning far less than they were due to reduced hours available. Added to this the fact that some were only able to make ends meet due to the overtime hours they put in, valuable overtime which is no longer offered. As a result, an alarming number of low income families are now living with exactly the same living costs as they had previously, but much less money coming in. That’s less money for bills, heating, clothing…and food. As the winter draws in and the pandemic sets to continue to steam ahead in cities and towns across the world, there is growing concern that these ‘forgotten’ families will be suffering in silence and going hungry.

In the US, food insecurity is a growing problem. A report by CBS News revealed that 1 in 10 Americans often or sometimes don’t have enough to eat, a level which has doubled since pre-pandemic times. The report also revealed that 1 in 5 adults were behind with their rental payments. Further worrying trends were revealed when the data was analyzed by race; this revealed that Black and Hispanic families had been particularly badly affected with 1 in 5 struggling to find enough food and 1 in 3 Black and Hispanic adults behind on their rent.

Over in the UK, the FT.com revealed that around 8.1 million people surveyed in a poll said they had experienced some level of food insecurity as a direct result of the Covid-19 pandemic. And according to statistics by the Trussell Trust food banks, there was an 89% increase in food parcels distributed in April 2020, and a 175% increase at the Independent Food Aid Network, when compared with the same month in 2019.

Food banks are one of the resources available to families in need, but there is still much stigma attached to seeking help from these outlets. Food banks are run by charities, churches or local volunteers and supported by large supermarket chains and generous public donations, they are able to offer free food parcels to those in need. In 2019/20, over 1.9 million people accessed food bank services in the UK and it has been reported that these families typically have an average of just $9.27 a day to live on.

There has been much criticism over the recent announcement in the UK that free school meal vouchers will not be issued to low income families during the October half term or indeed at Christmas. These vouchers would cover the equivalent cost of free school meals, allowing families to be able to afford additional lunch meals at home over the holiday period that would usually have been provided at school. The decision was made to supply families with these vouchers over the summer holidays and whilst schools were shut during the UK national lockdown, but the move to extend this until after Christmas was voted down by MPs in Parliament. At a time when the UK has implemented a 3 tier lockdown system, families across the country now have an uncertain financial time ahead, as the various lockdowns require different types of business to close depending on the local levels of infection. In such cases, parents are still employed and earning money, but at far lower levels than are sustainable , leading to a huge gap in terms of living costs. In fact, children’s charity The Children’s Society has revealed that some 850,000 families in the UK are struggling with the cost of food.

The statistics do not lie. Many of our neighbors and people in our community will be struggling to put enough food on the table and worried about how they are going to pay their rent or bills. As a community, we now need to come together to provide help and support to those who through no fault of their own simply don’t have enough money to make ends meet. With the winter set to fuel the fires of the pandemic even further, it has never been more important to make sure that everyone in our society is able to go to bed on a full stomach.

Late-Night Hosts Reflect On Trump’s Mishandling Of The Pandemic And Urge Viewers...