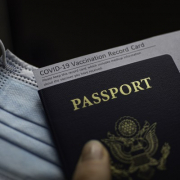 The world is still battling with the global COVID-19 pandemic, some countries seeing surges worse than ever before. However, the successful development of a vaccination has instilled hope of the health crisis coming to an end. For some, this has also instilled hope of travelling abroad on vacation, and some travel agents are reporting an increase in interest and bookings. There has been much discussion around the topic of safe international travel, with the idea of ‘COVID-passports’ being raised. An idea that would allow those that have been inoculated to travel freely – however, is it ethical to impose such a notion, excluding those who cannot be, or do not want to be vaccinated? And is it too early to book vacations to other countries on the basis of a COVID-passport or COVID-free world?

In the UK, holiday bookings have apparently increased as the UK rolls out coronavirus vaccinations. According to The Guardian, ‘The airline easyJet said its holiday bookings for the summer were 250% higher than they had been at this point last year. Its chief executive, Johan Lundgren, said: “We have seen easyJet holidays bookings from our over-50s customers increase over the last few weeks in comparison to pre-Christmas, which suggests a further confidence boost from the vaccine rollout.” The Guardian also stated that searches for holidays were up for many vendors. The popular Skyscanner website apparently reported that searches were up by 12% and bookings by 7% – July being the most popular month.

There has been talk of ‘COVID Passports’ which would allow passengers that have been vaccinated to move freely both locally and globally, allowing for a freedom of travel. Whilst not labelling it as a ‘COVID Passport’ some countries such as the UK have shut their borders to both national and international visitors, allowing only those who have tested negative for COVID-19 in a specified time frame, (72 hours in the case of the UK) to travel into the country.

The idea of COVID-passports is set to be debated by European leaders. It seems like a logical step to allow for the opening of tourism and the safe travel of tourists, however it does have its down sides. Opposers to the idea highlighting that it may not be ethical. Bloomberg recently published an insightful article which highlighted some of these potential issues, writing:

‘Today, it’s the prospect of a Covid-19 vaccine certificate that’s conjuring up digital-dictatorship fears. The idea is being pushed by the travel industry as a leap towards normality after the worst year on record for international tourism and by technology firms eager for lucrative government contracts and a gold mine of data. Yes, it’s nice to daydream about being able to travel freely again, but critics say it would introduce an unequal society in which an inoculated elite get the freedom to fly long-haul, attend concerts or dine in restaurants. Do we really want to be divided between the jabs and the jab-nots?’

Bloomberg points out, that although European leaders are looking to discuss the topic imminently, the vaccination program across Europe has only just begun being rolled out. Meaning that should a COVID passport come into play, only a small amount of people would qualify. Science is also yet to see how long vaccinations can offer immunity for and further still, some people may not want or be able to take the vaccination, excluding them from a right to travel.

However, some tour operators, such as the UK based cruise and holiday provider (whose main demographic is the over-50s), Saga, have begun to only allow those who have been vaccinated to travel with them. The firm has apparently seen a surge in bookings since the UK’s vaccination program was announced. The Guardian reported: ‘Traffic to its bookings website was up by 16% in the first two weeks of this year, compared with the first two weeks of December, while sales made through Saga had doubled over the same period. The interest comes despite the foreign secretary, Dominic Raab, saying it was too early to plan for summer holidays this year because of travel restrictions and Matt Hancock, the health secretary, suggesting on Monday that holidays abroad may not be a given.’

However, the cruise provider has now stipulated that only vaccinated passengers will be allowed to travel, and every passenger will need to take a COVID test at the departure terminal, in addition to a number of other safety measures. Saga’s cruise competitors have not yet imposed such a plan.

A spokesperson for Saga said: “The health and safety of our customers has always been our number one priority at Saga, so we have taken the decision to require everyone travelling with us to be fully vaccinated against Covid-19. Our customers want the reassurance of the vaccine and to know others travelling with them will be vaccinated too.”