Blog - Latest News
You are here: Home1 / News2 / Technology News3 / Rumours That Apple Plans To Redesign The iMac After Nearly A Decade 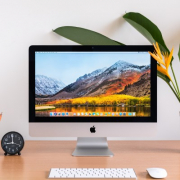 The multinational technology company, Apple, has a vast and highly popular range of devices used by a multitude of industries and individuals. From the iphone to the Ipad Pro, the Apple watch to the Desktop iMac, Air Pods to the Macbook. Whilst much of its other devices have been redesigned and improved, the all-in-one desktop, dubbed the iMac has remained much the same since 2012, (which was a variation from the design of 2007) boasting only minor alterations. In an exciting move for technology buffs and fans of the iMac, rumours are circulating that Apple is planning a redesign of the iMac.

According to Bloomberg, the move is part of a shift away from Intel Corp. processers in favour of Apples own silicon processor, ‘The new models will slim down the thick black borders around the screen and do away with the sizable metal chin area in favor of a design similar to Apple’s Pro Display XDR monitor. These iMacs will have a flat back, moving away from the curved rear of the current iMac. Apple is planning to launch two versions — codenamed J456 and J457 — to replace the existing 21.5-inch and 27-inch models later this year, the people said, asking not to be identified because the products are not yet announced.’

The iMac is reported to feature Apple’s new M1 chip, which is currently only used in the new MacBook Pro, MacBook Air and Mac Mini. Mac Rumours explains the M1 chip:

‘As a “System on a Chip,” the M1 integrates several different components, including the CPU, GPU, unified memory architecture (RAM), Neural Engine, Secure Enclave, SSD controller, image signal processor, encode/decode engines, Thunderbolt controller with USB 4 support, and more, all of which power the different features in the Mac… Built into the M1 chip, the unified memory architecture lets the CPU, GPU, and other processor components don’t need to copy data between one another, and are able to access the same data pool. This brings notable speed and efficiency improvements to the M1. This memory architecture means that the RAM is not user upgradeable, which isn’t too much of a surprise because few Macs have user accessible RAM. M1 Macs max out at 16GB RAM, but even the base 8GB is enough for everyday tasks.’

The move away from the Intel Corp Processor to their M1 chip, the brand can make some major design changes that may not have been previously available. Many have predicted that these core changes will go hand in hand with some major changes to their look. A redesign of the iMac alongside some of their other devices will be a welcome change, as many have pointed out that some of Apple’s offerings, such as the iMac and the Macbook Pro and Air, have remained relatively unchanged for some time, whether in regards to software or design or both.

Predictions are already coming in, as to how much Apple will update the iMac, Jason Snell, writing for Macworld, wrote:

‘I predict that the current 21.5-inch iMac is history, replaced by a model with a larger display. Some of the design changes are obvious, such as much smaller bezels all around. The easy bet is that Apple will shrink all the bezels, upgrade the camera (maybe to add Face ID to the Mac for the first time), improve the display’s dynamic range (MicroLED displays are rumored), and keep it all wrapped in a familiar shape.

My hope is that Apple will go a little bit further, taking a page from Microsoft’s Surface Studio and making the iMac able to drop down into more of a drafting-table configuration, where it can be driven by an Apple Pencil, if not fingertip input. But my bet is that Apple will take the conservative route and make an iMac that seems familiar, yet updated for a new decade.’

Reports suggest that Apple will be doing an overhaul of its computer line-up with the move to the new ‘Apple Silicon’ processors. However, the iMac redesign is expected to be the biggest visual update to any of the Apple products in 2021.

According to Bloomberg: ‘Apple is also working on a pair of new Mac Pro desktop computers, its priciest Mac machines that don’t come with a screen included, the people said. One version is a direct update to the current Mac Pro and will continue to use the same design as the version launched in 2019. Apple has discussed continuing to use Intel processors for that model rather than moving to its own chips.’