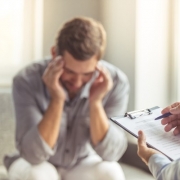 International Men’s Day landed this year on Thursday, November 19th, and in comparison, to the widely celebrated International Women’s Day, may often go unnoticed by the general public. Often, International Women’s Day is surrounded by sardonic comments from online trolls asking ‘When is international Men’s Day?’ Well here it is, and it often raises awareness for important male-oriented issues. November, coincidentally, is also the month of ‘Movember’ for places like Britain, which encourages men to grow a moustache to raise money and awareness or a series of male health issues, such as testicular, prostate cancer and suicide prevention. On International Men’s Day, this year’s theme is ‘Better Health for Men and Boys’ and many organizations and groups have been raising awareness surrounding Men’s mental health.

2020 has been a difficult year for most of us and taken a huge toll on our mental health. With the anxieties surrounding a global pandemic and the catastrophic disruption to our daily lives, mental wellbeing is a serious concern. Millions of men across the world will be struggling with mental health problems but gender stereotypes will cause a damaging silence around the subject. Often men are not allowed to show weakness or emotion, being told to ‘man up’ or ‘toughen up’ in the face of struggles rather than show emotion. This has led to what many deem as the ‘silent epidemic’ of male suicide rates. Men are also less likely to access psychological therapies than women, not accessing the support they need for recovery and wellbeing.

Male stereotypes play a huge role in the general consciousness of what a man ‘should’ be, and often these stereotypes can be damaging when it comes to coping with mental health issues. Matt Murphy in The Independent wrote: ‘Studies show that in fictional films through to reality television, men are still glamorized for appearing aggressive, physically stronger, or showing no emotion at all – look no further than Love Island. Meanwhile authoritarian male leaders who embody these ideals are still elected and lauded across the world. These are all role models whose attitudes set examples for the rest of us.’

The HeForShe campaign, a Global Solidarity movement founded by UN Women, celebrated the day by posting several informative graphics, with posts on Twitter that stated:

‘Men have a suicide rate three times higher than women’. ‘Men make up 92% of deaths in the workplace’. ‘Men are nearly twice as likely to suffer from heart disease than women.’ Alongside the caption: No More Silence. No More Stigma. No more stereotypes. Gender stereotypes often discourage men from seeking the help they need. On today’s #InternationalMensDay, let’s put an end to gender stereotyping.

Alongside this, HeforShe posted quotes from famous men, such as Dwayne Johnson, who said: “Depression never discriminates. Took me a long time to realize it but the key is to not be afraid to open up. Especially us dudes have a tendency to keep it in. You’re not alone,” and Kevin Love: “No matter what our circumstances, we’re all carrying around things that hurt – and they can hurt us if we keep them buried inside. Not talking about our inner lives robs us of really getting to know ourselves and robs us of the chance to reach out to others in need.’ This post by HeForShe was accompanied on Twitter by the caption: MYTH BUSTERS: Men don’t show emotion. Men don’t cry. Asking for help is a sign of weakness. On today’s #InternationalMensDay, we are busting the myths around men’s #Mental Health.

According to Mindwise.org, and research conducted on 21,000 American men by the National Center for Health Statistics, nearly 1 in 10 men experience depression and anxiety, which when left untreated and reach a crisis point of suicidal thoughts. Suicide is 3.5x more likely in men than women, 49% feel more depressed than they will admit and men are almost two times more likely to binge drink than women.

Mindwise wrote: ‘About 6 of every 10 men experience at least one trauma in their lives: Men are more likely to experience trauma related to accidents, physical assault, combat, disaster, or to witness death or injury. PTSD can develop weeks, months, and sometimes even years after an experienced trauma, and can cause a person to relive the traumatic event, avoid places or situations that serve as a reminder of it, feeling on alert or keyed up for danger, experience nightmares or flashbacks, and a number of other troubling symptoms that can interfere with their everyday life.’