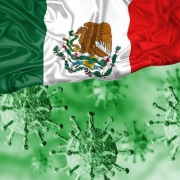 Following a surge in confirmed cases of Coronavirus in Mexico, the Centers for Disease Control and Prevention (CDC) has issued a warning for all Americans to avoid traveling to the area.

With the number of those infected now passing over 1.11 million – and more than 107,000 deaths – the Central American country has seen their death toll become the fourth highest in the world, with only India (3rd), Brazil (2nd) and America (1st) having higher figures.

The country has also recorded the second highest case fatality rate with 9.5 percent per every 100,000 residents; Yemen has the highest rate of 28.3 per cent.

Yet with such low levels of testing being carried out there are concerns that the actual number of confirmed cases and deaths relating to coronavirus are much higher.

With the latest figures continuing to rise the CDC announced that they were raising Mexico’s travel warning to the highest level, 4.

According to the statement, announced on their website, “Travelers should avoid all travel to Mexico.” The statement also stated that if you chose to ignore their warning and go to the country you could “increase your chance of getting and spreading Covid-19”.

A further statement from the Director-General of the World Health Organization (WHO), Tedros Adhanom Ghebreyesus, said “the number of increasing cases and deaths in Mexico is very worrisome.”

Mexican President Andrés López Obrador has often refused to wear a mask and while the WHO did not mention him by name they did encourage the country’s government to take a more serious stand in the fight against the virus.

In response Hugo López-Gatell agreed that the WHO’s comments were important but also stressed that the cold weather from winter would see a dramatic increase in cases anyway.

The recent warnings will be seen as a further nail in the country’s airline industry’s coffin with many airlines in America pushing their flights to destinations including Cancun, offering Americans a much needed break at the end of a strange year.

In fact not only did Airlines for America (A4A) announce last month that Mexico was the ‘clear leader’ for international travel, travel itinerary app TripIt shared data that revealed that although travel to Mexico – like most overseas destinations – was down this year, ‘the share of US-origin flight reservations to the country have increased 179 per cent year-over-year’.

While there have been several causes floated for the increase, experts believe that the main reason is that the country does not require Americans entering the country to provide a negative Covid-19 test, something that many other popular destinations such as the Caribbean require.

Alongside advising against travel to Mexico, the CDC has recommended that those who have to visit the country have a Covid-19 test in the days before their flight however they are also insisting that you should not travel “if you are waiting for test results, test positive, or are sick.”

As well as being tested before travel, the CDC has also recommended that travelers have another test on their return, followed by seven days quarantine at home, while those who do not have another test should “stay home for 14 days”.

Although the warnings have been put in place it is expected that thousands will still head to Mexico in search of some sun.

One traveler from California is visiting a remote yoga retreat that can only hold 30 guests and says, “I feel that I know the situation I’m getting into and assume the risk. It’s an optional retreat, so if anyone wants to cancel, they can, it’s what you feel comfortable with.”

And with California so close to Mexico she continued, “It’s like going into a neighboring state for us. It’s a shorter flight than others I’ve taken, so I almost feel better going to Mexico.”

Travel to Mexico has remained consistent throughout the pandemic with one holiday maker admitting she had been to the country several times in the last nine months.

“I felt more safe there than I would at a Target or market in Los Angeles. The resorts were secluded, they weren’t selling the hotels to 100 per cent capacity, and everyone was wearing masks and abiding by the rules. So much in those areas are dependent on tourism, and you could tell they were working incredibly hard to make the guests feel safe.”

De Jay Bhatt believes that those who continue to travel are at danger of spreading the virus saying, “people that think they can escape the virus in Mexico are in for a potentially different scenario. We’re in a time where the pandemic is getting worse, we’re setting records we don’t need to set, and it’s not getting better.”