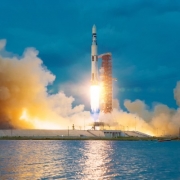 Landing on any planetary entity has always been a hazardous endeavour , but now NASA has developed a range of pilot-free landing and hazard-avoidance technologies to help address this space-age challenge and make exploring new locations safely a reality.

The process of landing in space is more complex than it might first appear. When choosing the right place to touch down, it is important to avoid natural terrains such as crater slopes or boulder fields, as this could impact the instrument’s abilities to move around the landscape and prevent it from achieving the objective of the mission. The reality is that years go into planning these missions and the average space exploration costs around $450 million! Given the great expense that comes with space explorations, there simply isn’t the room to get things wrong.

In order to improve the safety and reliability of future space landings, NASA has set to work developing what will essentially become a spacecraft’s ‘artificial eyes’ and an ‘analytical brain’ to help determine the optimal place for landing. This will be achieved through a combination of laser sensors, a camera, a high-speed computer and sophisticated algorithms.

The camera will take photographs of the surface at a rate of 10 per second and these will be matched with the computer’s database, which includes preloaded satellite images of the landing field and known landmarks. The algorithms will search the images being supplied by the camera and match them to known landmarks in order to determine where the spacecraft is located. From this, it will be able to determine the safest place for landing. As the spacecraft gets even closer, three lasers will bounce off the surface, helping the computer to determine the direction, distance and speed required for a safe and secure landing.

The ultimate aim is that it will be possible for spacecraft to avoid boulders, craters and other space hazards and that the landing area, also known as the eclipse, can be drastically reduced to about the size of half a football field. This may still seem a fairly large landing space, but it is in fact tiny in comparison to what has been needed in previous missions. For example, 1968’s Apollo 11 landing eclipse was 11 miles by 3 miles and in this instance, the lander was piloted by astronauts. When it comes to autonomous (unpiloted) landings, the sites were even more expansive, with Viking landing on Mars with a massive 174 mile by 62 mile eclipse. As technology has advanced, the size needed for autonomous landings has decreased and indeed, the 2012 Curiosity rover landing eclipse was just 12 miles by 4 miles.

The project is being spearheaded as part of the Space Technology Mission Directorate’s Game Changing Development program and has been coined SPLICE, which is short for the Safe and Precision Landing – Integrated Capabilities Evolution project. And it looks like the project will be getting a test run as three of the main subsystems that make up SPLICE have been integrated into the Blue Origin New Shepard rocket mission which took off on 24th September. Speaking about the mission, a Blue Origin spokesperson said, “The experiment will verify how these technologies (sensors, computers, and algorithms) work together to determine a spacecraft’s location and speed as it approaches the moon, enabling a vehicle to land autonomously on the lunar surface within 100 meters of a designated point.”

It is hoped that this technology will help advance space exploration and help to initiate automated landings on planetary locations which have to date been too risky to attempt unpiloted. By predetermining which areas are ‘safe’ to land, it also means that multiple landings can take place at the same location, rather than just ‘somewhere’ within the eclipse zone. When offloading items such as cargo and supplies, this approach and precision clearly saves valuable time, resources and energy.

The technology has been designed to assist with future landings on the Moon and eventually, could be adapted for missions to Mars. Right now, the focus is on making sure the individual elements work together effectively as a single system, which is why the current testing of three out of the four crucial subsystems on the Blue Origin flight are so critical. It is hoped that the tests will perform as expected, although there are always unknown factors in space that may hinder the success. One area is the effectiveness of the lasers involved in the landing process. Although these have been tested on Earth, it is not known for sure how well they will reflect off the lunar surface. However, even if they emit a poorer signal than expected, the developers are very confident that they will perform as needed and enable a swift and successful lunar landing.

In the future, it is hoped that this technology will enable us to reach more unexplored areas of our solar system and find out more about the universe around us.