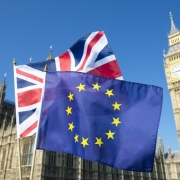 As economies around the world stutter as a result of the effects of the coronavirus pandemic, the UK faces an even higher financial mountain to climb as trade talks with the European Union continue to falter. A number of well-respected financial experts are forecasting disastrous results for the UK economy in the case of no Brexit trade deal being agreed upon.

Experts have warned that the Covid crisis will exacerbate a ‘disorderly’ Brexit as businesses will be ill equipped to deal with the end of the transition period as a result of financial losses and diverting attention away from leaving the EU.

“The combination of Covid-19 and the exit from the EU single market makes the UK outlook exceptionally uncertain,” Laurence Boone, chief economist at the Organization for Economic Co-operation and Development, said in a report this week. “Actions taken to address the pandemic and decisions made on future trading relationships will have a lasting impact on the United Kingdom’s economic trajectory for years to come.”

The OECD has warned that a failure to agree a free trade agreement before the end of the Brexit transition period would result in a 6.5% reduction in the economy over the next few years compared to if the previous terms had been upheld.

Meetings between the two sides concluded for the time being at the end of last week without any notable breakthroughs in discussions. According to Mujtaba Rahman, managing director for the political risk consultancy Europe at Eurasia Group, key sticking points remain fishing rights and the framework and structure for resolving future disputes.

“We don’t think the deal will flounder on fish, but we do think the technical and political challenges it presents will be more difficult to overcome than many believe,” Rahman said Thursday.

“As Johnson’s government tears itself apart on coronavirus, the need for a political win, which only a deal can be, is greater than ever,” he said.

CNN is reporting that if the UK walks away from trade talks empty-handed, they could be facing a $25 billion loss to the economy in 2021, according to analysis based on forecasts from Citi and the Institute for Fiscal Studies.

Álvaro Pereira, the director of the country studies branch at the OECD, said: “We know Covid has been the largest economic shock and social shock in the last few decades all across the world. Brexit obviously compounds the issue.

“The most important thing in the next few days and months is to focus on a deal, so the closest possible relationship is established between the UK and EU. Both parties lose if there is no deal.”

While there remains time for a deal to be completed, tensions are rising on both sides and representatives from both are raising the stakes through comments in the media. UK Prime Minister Boris Johnson has said that he is prepared to ‘walk away’ from the table if no progress is made, while European Commission President Ursula Von der Leyen called for an intensification of talks.

“There’s a deal to be done, but there needs to be flexibility on both sides, energy and goodwill and political will on both sides, and the prime minister will say more (today),” the UK foreign secretary Dominic Raab told BBC Radio 4’s Today programmed.

“I’m surprised and disappointed by the lack of flexibility and will that… seems to have come out of the European Council.”

Boris Johnson has repeatedly imposed arbitrary deadlines on the talks that seem to have had little to no effect. Recently, Johnson said talks needed to be completed by mid-October in order to give businesses a chance to plan and adjust accordingly, but that deadline has come and gone with talks seemingly having barely progressed.

“The prospect of no deal would be daunting enough, let alone dealing with it in the middle of a global pandemic,” IoD senior policy adviser Allie Renison said. “These disruptions won’t cancel each other out. If anything they would compound the pain for British businesses.”

As coronavirus cases continue to surge in the UK as it prepares for winter, the government has elected to take a regional approach to lockdowns and has implemented a three-tier system, in which some parts of the country are in full lockdown and others are relatively unaffected.

Some sectors have been forced to shut again and a large amount of small, medium and large businesses are suffering as a result. In some parts of the country, bars and restaurants are no longer open and there is little sign of immediate improvement.

Following the talks on Thursday, German Chancellor Angela Merkel said, “in some places there was movement, in other places there is still a lot of work to do.”

“We have asked Great Britain to continue to be willing to compromise towards an agreement. Of course, this also means that we have to make compromises,” she told reporters.