Blog - Latest News
You are here: Home1 / Around The Web2 / U.S.3 / Rising Drug Prices Stoke National Debate, and a Bold Plan in Californi... 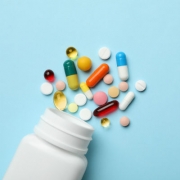 Paloma Marolf had an active childhood with no major health concerns until she went into a diabetic coma at age 15. Her diagnosis with type 1 diabetes meant Marolf’s already struggling family gained a new financial burden, a monthly cost that ranged up to $2,000. There were times the University of Arizona freshman held off buying insulin for a day.

“My pancreas doesn’t produce insulin like everyone else’s,” the 19-year-old said, “so the fact that I have to worry about if I’m going to get my insulin for next month and if my parents are going to be able to afford it is a huge stressor because it’s life or death for me.”

To save money, 25% of diabetics take less insulin than they are prescribed, and one-third didn’t tell physicians or families they were doing so, according to a 2019 survey published by the Journal of the American Medical Association.

Insulin isn’t the only drug that patients struggle to afford these days. In Arizona, a survey of pharmacies in Phoenix, Tucson and Holbrook found drug prices are on the rise, with users of one SSR antidepressant, sertraline, reporting prices that are nearly 800% more than the national average price, according to a 2019 Arizona Public Interest Research Group report.

The issue of drug pricing took center stage at Tuesday’s State of the Union address, when President Donald Trump called for a national strategy to solve a problem that has inspired a few state-based proposals – including a recent proposal for California to contract directly with pharmaceutical companies for generic insulin and other drugs.

Gov. Gavin Newsom wants California to reduce costs by shaping the generic drug market. In his annual budget proposal last month, Newsom called for the creation of a single market for drug purchasing that would additionally require manufacturers to contract with the state for generic drug production and set statewide prices.

“We are already in active conversation with some of the major purchasers in this state,” Newsom said during the Jan. 10 news conference addressing his proposal. “I can assure you things like insulin are top of mind in terms of that prescription generic program and strategy.”

Those priorities aside, there are few details about how California would become the first state in the U.S. to license the manufacture of generic drugs, and some experts say they can not endorse the proposal without more details.

One skeptic of the plan is the Association of Accessible Medicines, a Washington, D.C., trade association representing drug manufacturers and distributors. They don’t expect Newsom’s plan to work because it only targets generic drugs and ignores the affordability of expensive branded drugs, said Rachel Schwartz, the organization’s spokeswoman.

Low-income families like Marolf’s and minority communities are expected to benefit most from Newsom’s proposal, proponents and some health experts say.

Native Americans and Hispanic people, and people of lower economic status, are diagnosed with diabetes at a higher rate than the average, according to a 2017 report by the federal Centers for Disease Control.

“It’s low-income families who fall through the cracks,” said Geoffrey Joyce, director of health policy for the University of Southern California’s Schaeffer Center, which studies health policy and economics. For many, prescription coverage hinges on whether they qualify for Medicaid, the government-funded health insurance for low-income people of any age.

“If you’re on Medicaid, for example, drug coverage is quite generous and cost sharing is minimal,’ Joyce said, “but those who don’t qualify for Medicaid are the ones who are more vulnerable to high drug costs.”

Maintaining steady insurance coverage to deal with chronic diseases can be difficult for consumers. For Marolf, whose family is low-income, some of her biggest challenges arose when private insurance companies would stop covering her medication without notifying her family, forcing her mother to pay out of pocket.

The Growth And Development Of Renewable Energy Technologies

The Science of Attraction – How Do We Fall in Love?
Scroll to top