Blog - Latest News
You are here: Home1 / News2 / Travel News3 / The Buckeye State, the Jewel of the Midwest 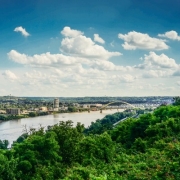 Nicknamed the Buckeye State, partly due to the number of buckeye trees that were once plentiful across the state’s hills and plains, Ohio is a jewel in the middle of the Midwest. With a vast number of natural areas to visit, such as the Ohio River or Lake Erie, Ohio is also home to farms, stunning scenery and cities that you can take days to explore. So where should you visit first?  The Lake Erie Islands, located in the Great Lake are a must-see.  Book your spot on the ferry from one of the several docks along the coast and take your tours of the many islands.  It is worth noting that some are privately owned while others require a membership before you are allowed to enter them.

The most popular visitor destinations are Kelleys Island and the Glacial Grooves State Park, both described as ‘Ohio’s best kept secret’ and can be accessed daily by ferry. Another area of natural beauty is the Cuyahoga Valley National Park, near Cleveland.  With nearly 200 miles of hiking trails available you will be sure to spot one of the 70 waterfalls that are in the park, all heading to the Cuyahoga River.  As well as the water features the area is home to sandstone ledges, gorges and beautiful hills are greenery.  However if a hike seems too much exercise then head to the Cuyahoga Valley Scenic Railroad that will take you through the park, stopping at stations to allow you to hop on and off.  Whether you take the full journey or just part way, the views from the train are stunning.

Once you have finished your trek around Cuyahoga Valley National Park why not venture into Cleveland, built on the edges of Lake Erie and full of amazing attractions including the Rock and Roll Hall of Fame which is home to exhibits on some of the most influential artists in music including David Bowie and Elvis Presley. If music is not your thing then do not despair.  Cleveland is home to 78 square miles of activities and locations for fans of anything and everything!  Visit the Botanical Gardens or the zoo or if you want to do some shopping and dining head towards West Side Market, Cleveland’s oldest open air market that dates back to 1840 and has over 100 different stalls selling a variety of foods.

If you are looking for a day of thrills then make your way to Cedar Point Amusement Park, home to some of the fastest and thrill-seeking rides in the Midwest.  Located in Sandusky, the amusement park can be the ideal way for thrill seekers to spend their day before heading to the Cold Creek Trout Camp for a night under the stars. You cannot visit a state without spending time in the capital and the same goes for Ohio.  Columbus is a city that is full of regional areas including the Bible Belt, the Great Plains, the Rust Belt and Appalachia, all of which can provide you with a diverse and interesting look at life in Ohio.  One of the areas many head to is German Village, an area full of cobblestone streets, restored buildings and local cafes that serve the best coffee and pastries you could imagine!

Further along the Ohio River you will find the ‘Queen City’ of Cincinnati.  Once described as cheerful, thriving and animated by esteemed author Charles Dickens, the city is located across the Mason-Dixon Line meaning some residents believe they are in the Southern United States while others disagree. With a skyline that is full of views including the Cincinnati Observatory Center as well as some parks that are always welcoming, Cincinnati is an area that many who visit do not want to leave. Although the majority of Ohio is quite spectacular due to its location, make your way to Hocking Hills State Park to explore caves, cliffs, gorges and waterfalls.  There is evidence that over 7,000 years ago the area was home to the Adena people, especially around the caves, the most famous being either the Ash Cave or Old Man’s Cave.

Nearly 300 years ago Indian tribes including the Shawnee, Delaware and Wyandot people traveled through the area with some opting to put down their roots there.  These tribes gave the river the name Hockhocking, meaning ‘bottle river’, so called because of the bottle shaped valley.  However in 1795 more settlers, mainly white, came to the region after the Greenville Treaty and Hocking County was established in 1818.

There are many more areas in this beautiful state to visit including Holmes County, Dayton and Toledo however it is important to remember that many areas have social distancing rules in place due to coronavirus so many attractions may have shorter opening hours or fewer admissions than normal so it may be worth calling in advance to avoid disappointment.

How COVID-19 Altered The Way We Make Payments