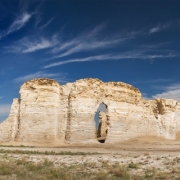 Situated in the middle of America, Kansas has long been renowned for cowboys and prairies; with cattle ranches as far as the eye can see. But there is more to the ‘Sunflower State’ than is given credit.

American Indian history is rich throughout the state with many museums full of information and artefacts regarding the different tribes that lived there over the years, including the four that are still prevalent in the area.

As well as American Indian museums, you can also find museums that concentrate on African-American and Mid-American Native American cultures, particularly in the largest city of Wichita. The city is a big draw for fans of arts and culture and even features a science center.

The Sedgwick County Science and Discovery Center, known as Exploration Place, has a full calendar of special events, theater shows and exhibits throughout the year including shows Bridging Art and Science, Popnology, Big Mouth and Sun, Earth, Universe.

If you prefer to explore the great outdoors naturally then Kansas has some spectacular destinations for you.

One of the first landmarks to be classified as a National Natural Landmark is the Monument Rocks and comprises some of the most stunning chalk formations that have formed on a large area of flat farmland. With some formations as high as 70 feet there are several sections that have fossilized sea life in the formation.

However, those visiting the landmark usually head to the ‘Keyhole’, the famous hole in one of the monuments that acts as a window to watch the sun set in the distance, perfect for those photos for social media. And if you enjoyed your visit you should make your way to the Keystone Gallery to pick up souvenirs to take home, such as fossils, as well as local art. Being fully ‘off-the-grid’ means the gallery uses only wind and solar energy making it a must visit for those that love nature.

Another natural wonder is the Mushroom Rock State Park where you can see ‘hoodoos’, rock formations many of which look like mushrooms thanks to the erosion and weather damage that has taken place over the years.

Labelled as one of the ‘Eight Wonders of Kansas Geography’ the rock formations have been used as meeting places for Native Americans and you can see some of the graffiti from past generations on many of the rocks.

For a trip that is slightly off the wall you should head to Nutterville, an area of midtown Kansas City that was named after James B. Nutter, a local businessman.

The area has been through regeneration thanks to Nutter purchasing property years ago for renovation. Many of the homes and businesses are painted brightly and along with the flower displays the neighborhood provides a bright spark of personality into a potentially dull area.

If you prefer your history to your eccentricity a trip to Fort Scott is for you. During the 19th century Kansas was the frontierland and while the state was finding its feet the military were brought in to ensure the American borders were kept secure.
Built in 1842, Fort Scott was a major player in Bleeding Kansas and the U.S. Civil War and looked at the problems of slavery while it was still a big issue in the country. The Fort Scott National Historic Site provides guided tours around their historical buildings so you can hear and see how life was for Americans nearly two centuries ago.

Movie fans will love the small city of Wamego, located on the banks of the Kansas River, which is home to the Oz Museum.

Dedicated to everything to do with the Wizard of Oz – starring Judy Garland in the main role – the museum is full of memorabilia from the movie as well as original Baum books, Oz Parker Brothers board games and of course those ruby slippers.

While there you can also watch some of the original movies created, most of them silent, as well as pick up a treat from the gift shop to remind you of your adventure.

Finally, if you would like a day full of art and culture followed by a great night out then head to the university city of Lawrence. Home to the University of Kansas, worth a visit itself due to its similarity to Harry Potter’s Hogwarts, this youthful city has a plethora of art galleries, boutiques and restaurants dotted along the central area of Massachusetts Street. The nightlife is famous for the local breweries such as the Black Stag Brewery and Pub. Family owned the brewery sells great food alongside their beers and even offers tours and tastings.

As with all travel it is important to take into consideration the local restrictions concerning Coronavirus and Covid-19. Many businesses have social distancing rules in place while others may have reduced their offerings so investigate via their websites before you visit.

Spotify Wrapped Launches for 2020 Revealing Our Most Loved Music