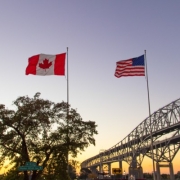 As coronavirus continues to ramp up its second spike of cases across the world, countries are implementing travel restrictions that are designed to keep most of us in our home countries.

However many were looking forward to a trip over the border into Canada once the closure agreement between the two countries expires on October 21. But this may not be the case any more.

The Canadian Prime Minister has recently announced that unless America can start getting in control of their Covid-19 outbreak the border will remain closed.

Speaking in an interview with Canada’s Global Television Network’s ‘Smart Start’ earlier in the week, Justin Trudeau stated that, “The U.S. is not in a place where we would feel comfortable reopening those borders. We will continue to make sure that Canadian safety is top of mind when we move forward. We see the cases in the United States and elsewhere around the world, and we need to continue to keep these border controls in place.”

America has seen the highest numbers of confirmed cases with 8,219,088 cases at the time of writing and 222,754 deaths. In the last week 13 states – including Montana, North Dakota, Minnesota and Alaska – have seen their own records for new cases in a week smashed. In North Dakota, which shares a 310-mile border with Canada, has reported cases spreading faster than any other state has experienced during the past year.

And the recent announcement that a 25-year-old man from Nevada has been confirmed as the first American to be diagnosed with Covid-19 has made many question whether a ‘herd immunity’ strategy is the right move to make. The patient, who was otherwise in good health, has seen his second infection come with much stronger symptoms than the first time he had the virus. Although he was the first American to be diagnosed twice there has been over 20 confirmed cases of people being reinfected around the world.

President Donald Trump has also claimed that he is now immune after being diagnosed with the virus earlier this month. The president, along with members of his family and White House staff, were all infected after a ‘superspreader’ event that saw no social distancing or wearing of masks.

So far Canada has only had 191,732 confirmed cases and 9,699 deaths, which, although still a high number, is significantly, lower than their neighbors.

And they too are experiencing a second surge in cases as the weather is cooling and getting damper as they move further into fall. According to a recent announcement from their government, the country had almost 31,000 new cases as well as 372 deaths within 14 days.

The worst hit provinces have been Ontario where there has been almost 5,500 new confirmed cases in the last week, and Quebec, which has seen over 7,000 new cases.

Acknowledging the second wave Trudeau said, “I think this second wave is really exhausting. It’s frustrating for everyone to have to keep going through this. We showed that we can pull together and get through this, as we did in the spring. Then people got used to the slow burn in the summer. Now that cases are spiking again – with the approach of winter, with the approach of flu season – we need to get things back under control.”

However Trudeau was quick to find some positives in an otherwise dire situation saying, “we know how to do it in a more targeted way now than in the spring. We know what kinds of businesses are more likely to spread Covid-19, what kinds of activities.”

He also said he believes that the country’s past experience “allows us to do the right things medically and keep us safe while not totally ruining people’s economies”.

With coronavirus still so prevalent in America, Trudeau has encouraged those in the country who prefer a warmer winter to try and stay put this year.

“I know there’s a lot of people worried about what’s happening south of the border in Florida, Arizona, California and other places where the virus is not under control or less under control than we are here,” he said. “The challenges around the health care system being overloaded down there and access to health insurance – making sure you have coverage in case something does happen – are a lot more difficult.”

However he said the government would not pose any restrictions other than a travel advisory saying, “Ultimately, if someone chooses to travel, we’re not going to keep them imprisoned in Canada. There’s freedom of movement in this country. Still, people have to recognize they’re putting themselves at risk, putting their loved ones at risk. And they may not have the right kind of health insurance or repatriation flights that we did early on if they choose to leave the country.”

How To Aid The Fight Against Climate Change

Thailand Declare a State of Emergency
Scroll to top