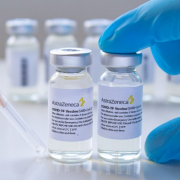 In another world first, the UK government has approved the Oxford-AstraZeneca vaccine in the fight against the COVID-19 virus. It becomes the second vaccination to be approved in the UK. In The comparison to the Pfizer-BioNtech vaccination which has a 95% effectiveness, the Oxford-AstraZeneca vaccine only has 70% effectiveness 22 days after the first dose. However, the Oxford vaccination is apparently more easily distributed and cheaper. Costing $3 to $4 a dose, easily shipped and stored in normal refrigerators for six months, in comparison to the ultracold freezers needed for the Pfizer vaccination. Thus, the Oxford vaccination may be a better option for poorer and hard to reach areas. The vaccination was authorized by the Medicines and Healthcare products Regulatory Agency (MHRA), following ‘rigorous clinical trials and a thorough analysis of the data by experts at the MHRA, which has concluded that the vaccine has met its strict standards of safety, quality and effectiveness,’ according to the UK government.

The emergency approval comes as the UK is facing a rapid rise of coronavirus cases, which many have linked to a new strain of the virus that could be more transmissible. A large portion of the UK entered into its highest restrictions – which includes a ‘stay at home’ limit – on Boxing day (December 26th). As virus rates continue to rise, the government placed even more of the UK into ‘lockdown’ restrictions on the 30th of December. The news comes on the same day that the Oxford-AstraZeneca vaccine was approved by UK regulators for rollout.

The New York Times wrote: ‘Britain on Wednesday became the first country to give emergency authorization to the coronavirus vaccine developed by AstraZeneca and the University of Oxford, clearing the path for a cheap and easy-to-store shot that much of the world will rely on to help end the pandemic.’

The UK has apparently ordered 100 million doses of the vaccine, which will be enough to vaccinate 50 million people. In combination with the Pfizer-BioTech vaccination this will apparently cover the entire population, according to the UK’s Health Secretary Matt Hancock. The first doses are due to be given out imminently – set for the 4th of January 2021. Vaccination centers will apparently start inviting people to come and get the jab. Vaccinations with the Pfizer vaccination have already been underway in the UK, and priority groups set up – vaccinations will and are being offered first to care home residents, over 80’s, health care workers and will work down the list based on vulnerability and age.

The UK government, however, has now changed their inoculation plans, recently announcing their new strategy to prioritize the first dose of the vaccinations for as many people as possible, lengthening the gap between the second dose, rather than quickly following up second shots to ensure full immunization. Instead, they will aim for widespread inoculation in an attempt to hasten immunization programmes and slow the pandemic.

The UK government stated in their press release: ‘throughout this global pandemic we have always been guided by the latest scientific advice. Having studied evidence on both the Pfizer/BioNTech and Oxford University/AstraZeneca vaccines, the JCVI has advised the priority should be to give as many people in at-risk groups their first dose, rather than providing the required two doses in as short a time as possible. Everyone will still receive their second dose and this will be within 12 weeks of their first. The second dose completes the course and is important for longer term protection.’ When the immunization programme began in Britain, the second dose was to be given after three weeks.

The New York Times wrote: ‘The effects of delaying second doses as a way of giving more people the partial protection of a single dose are not fully known. Britain, believed by experts to be the first country to undertake such a plan, will also delay second doses of the Pfizer-BioNTech vaccine, which has been in use in the country for several weeks and has been shown in clinical trials to have considerable efficacy after a single dose.’

Following the news of a longer wait between doses, the BBC reported that the Oxford-AstraZeneca vaccination was found to be 62% effective, (and when some were infected there were no serious cases of coronavirus where the patient needed hospitalization), some trials showed that a half-dose followed by a full dose increased the effectiveness to 90% but there was not enough data to support this. Further unpublished data apparently ‘suggests that leaving a longer gap between the first and second doses increases the overall effectiveness of the jab – in the sub-group given the vaccine this way it was found to be 70% effective after the first dose.’

How Hemp Oil Is Revolutionizing The Way We Relieve Pain