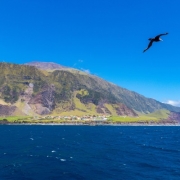 A remote group of volcanic islands that lie in the Atlantic Ocean has declared a 265,000 square mile marine protection zone in its surrounding waters.

Tristan da Cunha, a remote British overseas territory, has plans to make the marine sanctuary one of the largest in the world.

The area – approximately three times bigger than the United Kingdom – will act as a ‘no-take zone’ ensuring that any activities that could be harmful to the wildlife living in the area are banned, although sustainable fishing will be permitted. The move has been designed to protect the whales, seals, sharks, albatross and penguins that are in the area.

The move will see the area become the largest no-take zone within the Atlantic Ocean and become the world’s fourth largest marine reserve, something the people on the remote islands will be managing.

The UK has a ‘blue belt’ of protected areas surrounding their overseas territories which are patrolled via satellite technology and Tristan da Cunha’s marine reserve will fall into this domain. The Blue Belt Program has set aside £27 million (around $35.5 million) to be used in their Overseas Territories over the next five years.

Tristan da Cunha will be joining other areas including the British Antarctic Territory, South Georgia and the South Sandwich Islands, St Helena and Ascension Island.

Alongside this surveillance, the marine reserve will be backed by both an international partnership as well as the local community, who are said to be excited by the move, something that they have been requesting for sometime.

The sanctuary is currently a ‘nature haven’ to millions of wildlife and seabirds and has been mostly untouched.

While hunting will be banned, sustainable fishing will be allowed in around ten per cent of the local waters, but only for the residents, meaning that 90 per cent of the waters will be free for animals and wildlife to be safe as activities such as deep-sea mining and sand extraction will also be made illegal.

The move has been welcomed however it has been announced a quarter of a century after Unesco confirmed that nearby Gough Island was to be a World Heritage Site due to the unique wildlife in the area.

James Glass, Chief Islander, said that although they welcomed the move those who live on the islands have been devoted to preserving the area. He also confirmed that fifty per cent on the land had already been awarded protected status and that “the sea is our vital resource, for our economy and ultimately for our long-term survival.”

Glass continued, “That’s why we’re fully protecting 90% of our waters – and we’re proud that we can play a key role in preserving the health of the oceans.”

The Royal Society for the Protection of Birds (RSPB)’s CEO Beccy Speight welcomed the news, highlighting the fact that the new measures would make the area a “jewel in the crown of UK marine protection”.

“Tristan da Cunha is a place like no other. The waters that surround this remote UK Overseas Territory are some of the richest in the world.

“Tens of millions of seabirds soar above the waves, penguins and seals cram on to the beaches, threatened sharks breed offshore, and mysterious whales feed in the deep-water canyons.

“From today, we can say all of this is protected,” she said.

Meanwhile the UK’s Environment Minister, Lord Goldsmith, applauded the move saying, “we are hovering life out of the ocean at an appalling rate, so this new marine protected area is really a huge conservation win and a critically important step in protecting the world’s biodiversity and ecosystems.”

He continued, “It means our fantastic blue belt program has over four million square kilometers (1.5 million square miles) of protected ocean around the UK Overseas Territories.”

After the announcement was made British Prime Minister Boris Johnson said, “We are in danger of killing our seas. We are warming them up, making them more acidic and every day we fill them with turtle-choking, dolphin-poisoning plastic that is turning our ocean into a vast floating rubbish dump.

“That’s why I am delighted that the United Kingdom has now protected more than 4.3 million square kilometers of the world’s ocean, following Tristan da Cunha’s announcement.

“I am now calling on other nations to join us in our ambition to protect 30 per cent of the world’s ocean by 2030. We need collective global action if we are to bequeath a world that is every bit as wonderful and magnificent as the one we inherited.

“The waters around the UK’s Overseas Territories are some of the richest and most biologically diverse in the world – but they face a range of threats, including climate change, damaging fishing methods and unsustainable extractive activities.”

How Has The Digitisation of Real Estate Developed Through The Pandemic?
Scroll to top