Blog - Latest News
You are here: Home1 / News2 / Science News3 / What Do Scientists Need To Know About The Pfizer Vaccine Before it Can... 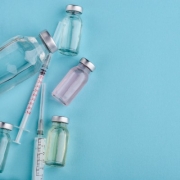 On the 9th of November, New York City-based pharmaceutical company Pfizer made the long-awaited and ground-breaking news that their COVID-19 vaccine, has proved 90% effective in protecting people against the transmission of SARS-CoV-2. It is the first vaccination to report such positive results in the phase III stage of trials. Although the vaccine still has more testing to undergo before it can be assured and safely rolled out, early data suggests that after being tested on 43,538 people, it protected 90% from developing COVID-19 symptoms. Naturally, many around the world have rejoiced at such positive news, and stocks surged after such a long year of struggle, but what do we know so far and what does this mean for the pandemic?

The vaccine is a two dose, RNA vaccination, which utilized a tiny fragment of the virus’ genetic code to cause a person’s immune system to create the antibodies needed to fight the virus. The RNA vaccination is new and has not been use in humans before. Nature explains: ‘The vaccine… in the form of messenger RNA — for human cells to make the coronavirus spike protein, the immune system’s key target for this type of virus. The Pfizer and BioNTech’s press release said that they had identified 94 cases out of the 43,538 participants, which suggests its 90% effectiveness after taking into consideration the placebo groups.

However, the developers will continue the trial of the vaccination until 164 COVID-19 cases are detected, which may change the effectiveness of the vaccination. The study will then be classed as complete and results can be analyzed. Many remain positive that this vaccine will still prove effective. So far, no safety concerns have been raised and the vaccine has shown no serious side effects.

One major question that scientists and medical professionals would like answered is whether the vaccine protects against all severity of COVID-19 cases? At the moment it is unclear as to whether the vaccine only prevents mild cases, or immunizes an individual against the a severe case of COVID-19 as well. Developers are also not sure how the vaccine will work in different demographics, for example on the elderly population. Although the press release did indicate that 42% of participants had “racially and ethnically diverse backgrounds”.

Scientists are also questioning how long the immunity of the vaccination could last, and the trial may need more months to determine this long-term effectiveness. However, as more details of the trial are revealed and as the trial progresses further, some or all of these questions may be answered.

According to Nature however, some of these questions may prove less important than rolling out a vaccine that is effective in light of the severity of the pandemic, writing, ‘although researchers want to see the data behind Pfizer’s vaccine trial, they are prepared to accept caveats that come with them. “Right now, we need a vaccine that works,” says [Florian Krammer, a virologist at Icahn School of Medicine at Mount Sinai in New York City], even if it works for only a few months or doesn’t stop transmission. “That’s what we need in order to get half-way back to normal.”

Before the vaccination can be rolled out, trials need to prove that the vaccination is safe, it shows a strong effectiveness in preventing people from catching the virus or at least reduces the number of deaths, the vaccine must also be able to be produced on a large scale. And finally, regulators must approve the vaccination before it can be rolled out. In the USA, the Food and Drug Administration has said that vaccines need to have least 50 percent efficacy to be submitted for emergency authorization. Pfizer has said it hopes to apply for emergency authorization in the third week of November

Although there are still more tests and data needed before the vaccination can be rolled out, manufacturing is gearing up to deal with the sheer volume of vaccinations needed, should it be approved. The Guardian reported: ‘manufacturing is already under way. Pfizer said they expect to supply globally up to 50m vaccine doses in 2020 and up to 1.3bn doses in 2021. Countries will decide who they priorities for vaccination.’ The BBC also reported that ‘Pfizer believes it will be able to supply 50 million doses by the end of this year, and about 1.3 billion by the end of 2021.’ Although some projections suggest that the vaccination could be rolled out to high-risk populations before the end of the year, the coming weeks and months will determine just how attainable this deadline is. As unforeseen delays and problems could occur that delay the vaccination further. Overall, however, many scientists and researchers remain optimistic about the news.

Ta-Nehisi Coates’ Best-Selling Novel “The Water Dancer” To Be Adapted...

Mass Testing Begins To Rollout Across The UK But How Does it Help?
Scroll to top