Blog - Latest News
You are here: Home1 / News2 / Science News3 / What Do We Know About The New Coronavirus Variant in the UK? 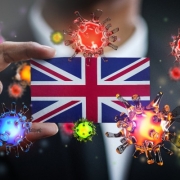 The UK government recently tightened restrictions in the United Kingdom over Christmas, in an emergency move that eliminated previous plans to lift restrictions over the holidays. This was apparently due to a new variant of the coronavirus that may be spreading at a faster rate than other mutations of the virus. According to the BBC, ‘It was first detected in September. In November around a quarter of cases in London were the new variant. This reached nearly two-thirds of cases in mid-December.’

On the new UK variant, New Scientist reported: ‘B.1.1.7, as it’s known, has 17 mutations compared with the original SARS-CoV-2 virus first discovered in Wuhan, China, including eight that may change the shape of the outer spike protein. Many of these mutations have been found before, but to have so many in a single virus is unusual. It was first sequenced in the UK on 20 September, but only caught the attention of scientists on 8 December, when they were looking for reasons for the rapid growth of cases in southeast England. On 14 December, the UK’s health minister, Matt Hancock, told parliament that a new variant that seems to spread faster had been identified.’

All viruses mutate over time, so the mutation of the coronavirus was expected and is being monitored. Dr Julian Tang, Clinical Virologist at the University of Leicester, told iNews, “This is quite normal for viruses – like influenza – where different viruses may infect the same person, leading to a hybrid virus emerging. This is just one of the ways that natural viral variation arises, new viruses will adapt to a new host over time – with decreasing mortality, and possibly increasing transmissibility.” The virus that was detected in Wuhan China, will not match the virus in different areas across the world. D614G mutation emerged in Europe in February and became the dominant form of the virus, A222V strain was thought to have developed from summer holidays in Spain.

Published on virological.org, an initial analysis of the B.1.1.7 strain of the virus has revealed 17 alterations to the virus that could be potentially important. This includes changes to the spike protein, which allows the virus to more easily infect our bodies cells. The report summarized that ‘The B.1.1.7 lineage accounts for an increasing proportion of cases in parts of England. The number of B.1.1.7 cases, and the number of regions reporting B.1.1.7 infections, are growing.B.1.1.7 has an unusually large number of genetic changes, particularly in the spike protein.’ Concluding that ‘the rapid growth of this lineage indicates the need for enhanced genomic and epidemiological surveillance worldwide and laboratory investigations of antigenicity and infectivity.’

According to the UK government, and various sources, so far there is no evidence that this variant causes more a more serious disease or leads to a higher death rate, but this is still under investigation. Further investigation is also apparently being undertaken to confirm whether the recently approved Pfizer vaccination will protect against this variant, there is currently no evidence to the contrary. Evidence has so far shown that infection rates in the areas where this variant has spread have risen faster than expected, suggesting it has a higher transmission rate but this is still to be confirmed. Some evidence has estimated that it could be 50-70% percent more transmissible, but this has yet to be confirmed. According to the BBC, the reasons why this virus strain is attracting attention are: ‘It is rapidly replacing other versions of the virus; It has mutations that affect part of the virus likely to be important; Some of those mutations have already been shown in the lab to increase the ability of the virus to infect cells.’

Other theories posit that the variant could now transmit more easily to children who were previously less susceptible. There is not yet a reason to believe that children could become more easily ill with the virus, but instead that they would act as carriers, helping to better spread the virus. This however, is again not confirmed and is under investigation.

The rapid spread and uncertainty surrounding the variant’s severity has caused the UK government to introduce a ‘fourth tier’ in the current UK ‘tiered system’ in order to reduce spread and further safeguard the public as further investigations are undertaken. The UK’s tiered approach basically applies different restrictions in correlation an area’s outbreak severity. Areas such as London and parts of South East England have been put under ‘tier four’ which means tighter restrictions, closing many businesses and issuing ‘stay at home’ messages, with some exemptions. Some countries have banned flights into the UK for a period until further investigation can be done.