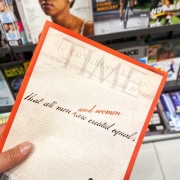 Coming at a time when positive stories are a breath of fresh air, TIME has now released their list of the 100 most influential people of 2020. We have come through many tribulations this year that have been felt by and touched many people all across the globe, including COVID-19 and the Black Lives Matter protests. Indeed, as the creators of the list so eloquently stated, ‘We’ve been doing the TIME 100 list of the world’s most influential people for nearly 20 years. But there has never been a year like this. A year of multiple crises, all over the world, all at once’

It has been an unprecedented year amidst the uncertainties that we are continuing to face, which is why TIME hopes to shine a light on the good that is around us. They hope to highlight the power we have by working together, supporting each other and living in unity.

The TIME 100 list has been running over 20 years and recognizes the individuals who have provided a pinnacle influence or who have gone beyond the call of duty from doctors, nurses, scientists through to leaders and celebrities. The 2020 awards has also acknowledged the highest number of women to be attributed to date, taking up 54 spaces on the list.

A spokesperson for the list said, ‘This year’s list looks far different than any of us could have predicted just six months ago. The TIME 100 has always been a mirror of the world and those who shape it. While you will certainly find people who wield traditional power on this year’s list—heads of state, CEOs, major entertainers—it also includes many extraordinary, lesser-known individuals who seized the moment to save lives, build a movement, lift the spirit, repair the world.”

The full list also pays tribute to those striving to gain awareness and fighting for causes in areas such as LGBTQ+, women’s rights, as well as campaigning for the environment and research. Candidates include Arussi Unda who was tributed on the list for her efforts in Mexico fronting a national strike in protest against gender violence. Some of the world’s most prominent leaders are also mentioned including China’s Xi Jinping, and Germany’s Angela Merkel alongside Donald Trump in the US for his unusual leadership style.

Also, this year has witnessed some of the biggest movements and honors the Black Lives Matters founders Alicia Garza, Patrisse Cullors and Opal Tometi, who have helped to create a message and sparked the movement for the importance for justice all over the world. The list is usually accustomed to concentrating on present influences however this year the list has paid tribute to those that though no longer with us their lives, their cause or their work has left a legacy. This includes George Floyd whose killing has caused controversy across the world and highlighted the need to stop police brutality and racism.

In light of the Coronavirus pandemic, it is not only frontline medical workers who have gained recognition but also the researchers who continue in their quest to learn more about the virus, and how we can prevent the spread of infection until a vaccine can be developed. This includes Camilla Rothe, an infectious-disease specialist from Germany, Dr. Anthony Fauci, an leading infectious disease expert in the US, Zhang Yongzhen, a researcher from China and medical worker Amy Sullivan from New York.

The list also pays mention to many famous faces that we are all accustomed to, from the big screens to music including Megan Thee Stallion, a 25 year old female rapper was featured on the list as an influential artist in rap. Other notable additions include iconic favorites such as Jennifer Hudson, The Wkend and Selena Gomez as well as one for the younger generation, JoJo Siwa.

Looking to sport, Formula One racing driver Lewis Hamilton was also featured on the list being noted as an ‘inspiration for everyone’ raising the awareness for the Black Lives Matter campaign through his success in racing. Other sporting personalities recognized on the list include Naomi Osaka for her career in tennis and Allyson Felix for athletics.

Bringing the TIME 100 list together in 2020 has been no feat, with the editors revealing that they created the list over Zoom meetings and whilst working remotely due to the pandemic. The TIME 100 editorial director Dan Macsai commented “We see the TIME 100 as more than a list. It’s a community of hundreds of leaders from across the years and around the world whose visions can guide us and whose achievements can bring us hope.”

After an unforeseen year the list comes as a beacon of light, sharing the accomplishments and hard work of people from all walks of life. It encourages us to celebrate the contributions these people have made to society and the wider world, in the hope that their work, achievements and presence will inspire others to build a future of peace and unity.

Just How Much Has Racism Damaged The Economy?

How To Protect Yourself From Covid-19
Scroll to top