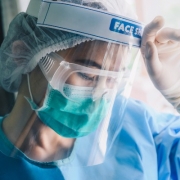 A Guardian investigation has found that the British government have been sourcing personal protective equipment (PPE) for the coronavirus pandemic from Chinese factories in which hundreds of North Korean women are secretly working in modern slavery conditions.

The UK’s Department of Health and Social Care (DHSC) have ordered hundreds of thousands of protective coveralls from factories exploiting North Korean labour in the city of Dandong on the Chinese border with North Korea.

“The workers have no days off. They are not allowed to go out. The North Korean [state] controls them. They make money for the country,” said a manager at one factory.

Reports indicate that the North Korean workers, the majority of which are women, are being forced to work for up to 18 hours a day with practically no time off. The workers are under constant surveillance and are unable to leave the factory when they desire. It is also being reported that the Dandong workers are having approximately 70% of their wages seized by the North Korean state.

The Guardian investigation, conducted over the past three months, also found evidence that PPE has been exported from these slave labor factories to a number of other countries around the world. This means that there are multiple governments indirectly contributing money from taxpayers into the Kim Jong-un administration and a country that the UN says is guilty of ‘widespread and gross human rights violations’ amounting to crimes against humanity.

“The wide range of human rights issues that the Commission has been requested to investigate include violations of the right to food and those associated with prison camps, torture and inhuman treatment, arbitrary detention, discrimination, freedom of expression, the right to life, freedom of movement and enforced disappearances, including in the form of abductions of nationals of other states. In accordance with its mandate, the Commission also investigated to what extent violations may amount to crimes against humanity,” a United Nations commission of inquiry on human rights in the Democratic People’s Republic of Korea statement read.

This is not the first time North Korea have sent off workers to foreign countries and then stolen their wages from them, and the UN has branded the practice as state-sponsored forced labor, which is defined as a form of modern slavery by the International Labour Organization.

Naturally, the UK government has been trying to source as much affordable PPE as possible since the outbreak of the pandemic earlier this year, but it is unlikely they will be forgiven by the British public for effectively transferring their tax money to a brutal dictator.

In fact, Boris Johnson and his team have already been criticized by a number of sources for a lack of transparency and accountability while awarding billions of pounds worth of PPE deals with various sources. The government used regulations that allow for contracts to be awarded directly and without competition in cases of extreme urgency.

This previous criticism means that there is unlikely to be any sympathy towards the UK government as it indirectly supports one of the worst regimes in the world. Of course, securing PPE during the pandemic was of the utmost importance, but it should not have resulted in a dropping of morals or accountability.

“The government should not be using regulations that allow for emergency procurement to rush through contracts without even trying to find out if there are risks to workers in supply chains producing PPE. This lack of due diligence lays bare the truth that, far from effectively tackling modern slavery, the government’s policies are allowing the egregious exploitation of workers,” said Phil Bloomer, director of the Business & Human Rights Resource Centre.

Over 21 million pieces of PPE were produced and exported by factories in and surrounding the city of Dandong between January and July this year, meaning that the factory owners and operators have profited massively during these times. “We’re all going to make millions,” said one of the factory owners.

“Dandong has become a global center of production for gowns and coveralls because they already have cheap North Korean labor. Gown production is labor intensive, so in Dandong it can be produced at the lowest cost and the highest profit,” said Seung-jae Kim, a South Korean author of two books on North Korean overseas workers.

“Workers are not free to decline the work, to quit, to use their free time, if they have any, how they want to, to freely socialize, and they do not get paid sufficiently, or in extreme cases, at all,” Remco Breuker, professor of Korean Studies at Leiden University in the Netherlands, said.

“We expect all suppliers to the NHS to follow the highest legal and ethical standards and proper due diligence is carried out for all government contracts,” the UK Department of Health and Social care said in a statement.