You are here: Home1 / acuvue 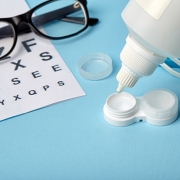 Though Acuvue’s innovative form of contact lenses do not become as dark as traditional sunglasses can be, they are capable of blocking up to 70% of light, reducing squinting and improving color contrast in the vision of wearers when outdoors in bright sunlight. According to one of the doctors who helped develop the technology, roughly two-thirds of contact lens wearers report being bothered by harsh lighting conditions daily, suggesting the new technology offers a clear benefit to consumers. The technology has been under development for over a decade, and has only recently reached the point where it is viable to be used as a consumer product, as the lenses are safe and capable of adapting to different lighting conditions in less than a minute.

Despite the lenses’ shortcomings, they represent a major advancement in the field of vision correction technology, as they are one of the first products to offer consumers vision improvement that goes beyond the capabilities of normal, healthy eyes.

If you’re a contact lens wearer who would like to try Acuvue’s newest product, you will likely have to pay a premium for the opportunity. While Acuvue’s website offers a trial set of the lenses for free, the lenses themselves are generally more expensive than Acuvue’s standard Oasys brand, depending on the retailer. On Lenscrafters’ website, a six-lens box of the new contacts costs at least $54.99, whereas a box of ordinary contact lenses from the same manufacturer costs $34.99. Generally, insurance plans don’t cover contact lenses, as they are considered a cosmetic alternative to glasses. As such, the cost of contact lenses can be prohibitive for some, as a year’s supply of lenses can cost several hundred dollars. That being said, many consumers, particularly those who spend a lot of time outdoors in direct sunlight, are likely to consider the vision-enhancing effects of Transitions lenses to be worth the price. Additionally, people with photophobia experience discomfort and pain when exposed to bright light, and Acuvue’s lenses have the potential to be extremely helpful in treating this condition.

Though they’ve only been on the market for a few months, initial reviews of the lenses have been positive, with reviewers noting that they feel a need to wear sunglasses significantly less often and that their vision is improved in the sun. Writing for CNet, Sarah Mitroff described the lenses as “cool” and said that she “loved” them, but noted that the purple-brown hue of the lenses when exposed to sunlight made her eyes look unusual. The extent to which this matters to people will vary on an individual basis, of course, but Mitroff noted that nearly everybody she showed the lenses to was “freaked out” by how they made her eyes look. Another shortcoming of the product is the fact that, because they react to UV light, they won’t activate while the wearer is driving, as car windshields block UV light. For the same reason, the lenses won’t activate while wearing sunglasses.

Despite the lenses’ shortcomings, however, they represent a major advancement in the field of vision correction technology, as they are one of the first products to offer consumers vision improvement that goes beyond the capabilities of normal, healthy eyes. Other technologies of this sort are currently in development, but are not yet available to consumers; for instance, scientists have developed contact lenses that zoom in when you blink twice, and contact lenses that can release medicine directly into the eye are currently being researched. While the Acuvue Oasys Transitions certainly signify a step forward in the potential for vision-enhancing technology, their mass-market appeal is likely to be limited at the moment, as their price, odd appearance, and other shortcomings are bound to deter some consumers. Nevertheless, the future of vision correction technology looks bright, and people who elect to take advantage of such technology may soon boast eyesight that surpasses that of people with healthy eyes.