You are here: Home1 / aircraft 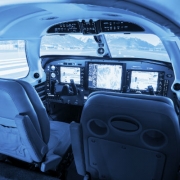 Believe it or not, Microsoft’s longest-running franchise is its Flight Simulator series of titles which debuted in 1982 on IBM PCs. The latest release in the series, 2006’s Flight Simulator X, was widely believed to be the end of the franchise as Microsoft had not made any announcements on the subject for over a decade. That changed this year, however, as the software company announced they were working on a reboot of the franchise, simply titled Flight Simulator, which is due to release in 2020 on Windows and Xbox platforms. Though the program is still in the alpha stage of development, Microsoft showed off their progress at a press event in September, impressing journalists with the depth and complexity of various aspects of the simulation.

Perhaps the most immediate and visually striking aspect of the simulation’s design is the environment. In crafting a believable and lifelike world for users to explore, Microsoft leveraged its extensive collection of satellite and aerial imagery, creating 3D facsimiles of real-world locations using software. Whereas the environments in previous Flight Simulator titles were created by artists who placed individual objects in the virtual world, next year’s title uses machine learning to extract details about the real-world environment to represent in the simulation. For instance, the program identifies forests and other wooded areas and populates them with procedurally-generated trees and other fauna. The result is an environment so detailed and true-to-life that members of the press were even able to identify their apartment buildings while flying overhead in a small plane.

In addition to the terrain, the simulation also attempts to replicate real-world weather conditions, constructed from data collected by weather stations around the world. The system analyzes radar imagery and other measurements in order to reconstruct cloud patterns, rain, snow, and other weather events, allowing users to fly through storms and hurricanes in real-time. As volumetric clouds are rendered dynamically, either in accordance with conditions in real life or at the user’s behest, the scattering of light through the sky is also simulated, leading to realistic shadows, sunrises, sunsets, and even rainbows where they would appear in real life.

By leveraging an approach where the environment is procedurally-generated, the developers at Microsoft are able to graphically represent the entire world, a feat that would be next to impossible if the environment were crafted by hand. There exist 44,000 airports in the real world, and Microsoft is intending to replicate all of them in their simulation. That also means that the game’s file size, relative to other games, is absolutely massive – as such, content is dynamically streamed into the simulator from the Internet. An offline mode is also available, but this mode reduces the detail of the environments considerably, causing them to look more like the simple, flat satellite imagery used in 2006’s Flight Simulator X.

Aircraft reacts realistically to changes in weather and other variables, and photogrammetry technology was used to replicate the interior of planes’ cockpits.

While the program’s simulation of the entire Earth is impressive and perhaps unprecedented, perhaps the more important aspect of the simulation is found within its collection of aircraft. Microsoft is focused on creating as realistic an experience as they can, with an additional focus on accessibility, as the team is working to ensure that a wide range of peripherals, from flight sticks to the standard Xbox gamepad, are supported. Aircraft reacts realistically to changes in weather and other variables, and photogrammetry technology was used to replicate the interior of planes’ cockpits. To demonstrate the accuracy of the simulation, Microsoft even invited a journalist to pilot a real plane after learning how to do so using the simulator.

Microsoft has very ambitious plans for this iteration of Flight Simulator. The company intends to support the product with continued development for an impressive ten years after its release, though it admits it doesn’t know yet exactly what this support will entail. Instead, Microsoft is going to release the closed alpha to a select number of users to observe how they interact with the virtual environment, and focus continued development efforts on the areas that generate the most engagement. There is certainly a lot of potential for simulation opportunities with a foundation as strong as the one Microsoft is building, and the company is going to be looking to the community for direction moving forward.