You are here: Home1 / ambient mode 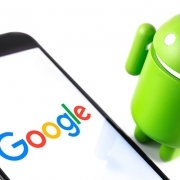 Google is known for their constant innovations for their various products, most notably the Android operating system that powers most smartphones. The newest version of Android, Android 10, introduces features like a system-wide dark theme, more sophisticated UI navigation controls, and improved location and privacy tools. While Android 10 continues to roll out to devices from a variety of manufacturers, Google is also looking to improve the Android experience in other ways, most recently in the development of a so-called “Ambient Mode,” which passively displays information on the phone’s display while it is charging and allows the user to interact with the phone in a limited way.

Google unveiled the feature in a Youtube video which shows Ambient Mode running on a Pixel phone and details the various features of the update. The video describes Ambient Mode as “Android’s proactive Google Assistant,” and Google Product Manager Arvind Chandrababu said that the goal for Ambient Mode is to anticipate users’ needs and allow them to accomplish tasks as quickly as possible. In doing so, Google hopes to move users away from an “app-based” way of doing things, in which users scroll through their list of apps and choose the one that matches what they want to do, to an “intent-based” way of doing things, in which the phone is intelligent enough to adapt to the user’s intent. This is part of Google’s broad philosophy of “ambient computing,” the goal of which is to make the integration of computing into users’ lives as seamless and invisible as possible.

While this philosophy is certainly very ambitious, the announcement of Ambient Mode represents only a small step towards that lofty goal. Though Google has said that Ambient Mode will be available on Android 8.0 and above, the number of devices that are announced to support the feature is limited, including relatively esoteric devices like Sony Xperia phones, Nokia phones, and Xiaomi phones, with no mention of more popular devices like the Samsung Galaxy line of devices or even Google’s own Pixel phones. Additionally, Ambient Mode in its current form is surprisingly limited, as it offers no customization features whatsoever, allowing users to adjust a limited number of quick settings, control compatible smart home devices like lightbulbs and thermostats, and view notifications like weather and calendar alerts.

While the extent of Google’s control over the smartphone operating system ecosystem is impressive, a number of factors prevent the company from offering the highest-quality products possible. For years, one of Google’s most damaging problems has been the fragmentation of its software lineup. The company has released  — and discontinued — a large number of messaging apps, for instance, and each of these apps is mutually incompatible with others. The problem is made worse by the fact that many smartphone manufacturers build their own messaging apps for their phones; for instance, the Samsung Galaxy s9 comes with an app called “Messages,” which, confusingly, is not the same as the “Messages” app developed by Google.

For this reason, text messaging on Android phones isn’t nearly as sophisticated or robust as iMessage, the app that comes standard on all iPhones and allows advanced features like read receipts and typing indicators, which are by and large absent on Android. In an attempt to correct this shortcoming, Google has recently announced that it would activate RCS compatibility on its Messages app for all Android phones in certain countries, which enables many of the messaging features that iPhone users have enjoyed for years. However, the problem of app fragmentation remains, as only people who are using an app that incorporates RCS compatibility can use these advanced features. As of now, Ambient Mode seems to be plagued by this same shortcoming, due to the feature’s limited availability and functionality. If the company’s prior conduct is any indication of future events, the likelihood of Ambient Mode being rolled out to most Android devices in a timely fashion seems low, as most Android smartphone owners are still waiting for the latest version of Android and other features to arrive on their devices.