You are here: Home1 / amputee 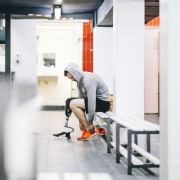 People who are unfortunate enough to have lost limbs or other body parts have long been able to supplement their bodies’ range of motion with the use of prosthetic limbs. However, despite advancements in the designs of these medical devices, prosthetics can be bulky and unwieldy, leaving some patients preferring not to use them in their everyday lives. A major impediment to the usability of prosthetic limbs is that they offer no tactile sensations to the wearer, leaving them feeling less like a natural extension of the body and more like an artificial object. However, new advancements in science and technology promise to integrate this functionality into the prosthetic limbs of the future, adding this key functionality to enhance the overall ergonomics of the devices.

Though technologies that link objects to human nervous system are still nascent, recent studies involving experimentation in this field offer promising results. Most recently, a paper published by Nature offers a compelling argument for the benefits of prosthetic devices which give their wearers sensory feedback about the motion of the limb and the sole of the foot touching the ground. Although the sample size of the study was small, featuring just two participants, the results of the study suggest that integrating sensory data into prosthetics technology has benefits that go beyond simply allowing patients to feel the ground and the motion of their knee, as participants reported greater confidence and walking speed as well as reduced physical and mental fatigue as well as phantom limb pain.

Phantom limb pain is a phenomenon associated with amputees, in which patients experience pain in limbs that they no longer have. Initially, phantom pain was thought to be a result of the psychological trauma of losing a limb, and while doctors still believe that phantom pain has a significant psychological component, it’s generally understood that the pain results from changes in the brain and spinal cord following amputation. Multiple therapies have been developed in an attempt to reduce phantom limb pain, including acupuncture, biofeedback, massage therapy, and virtual reality therapy, and while many of these are somewhat effective, none are able to completely remove the sensations of pain from affected individuals.

The new devices, developed for the study, work by connecting electrodes attached to the sciatic nerve located just above the site of the amputation to seven sensors that transmit data about foot pressure and one sensor that decodes the angle of the knee. One participant, a Serbian man, described the experience by saying that “if you close your eyes, you will think that you have your own leg.” After using the prosthetic limb for a month, one participant reported a complete elimination of phantom leg pain, while the other reported sporadic pain, an improvement from the amount of pain he experienced before the treatment.

With the enhanced prosthetic limbs, patients were able to walk more confidently and quickly, even on more difficult sandy terrain, than when the sensors in the prosthetic limbs were turned off. Though the ability to move throughout the environment more quickly and with less effort is a definite benefit of the technology, the researchers believe that the reduction of phantom pain afforded by the devices has an even greater benefit on overall quality of life. As the study lasted only three months, the devices were removed from the participants at the end of the study, but the researchers plan to further their work with studies featuring improved technology and a greater number of participants.

The team who pioneered the study has done work with prosthetics that give their users sensory feedback in the past. Their company, Psyonic, has developed an artificial hand called the Ability Hand, which is slated to become available in the US shortly and features pressure sensors on each fingertip.