Tag Archive for: and 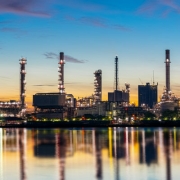 Climate change presents a major problem for nearly every industry in the world, but the oil and gas industry is perhaps the most directly affected one. As the burning of fossil fuels is the most significant contributor to the greenhouse gas effect, oil and gas companies remain the target of blame for the crisis around the world. As such, these companies are faced with the challenge of reconciling their responsibility to the planet with their obligation to generate profits. Although the science on climate change and the activities that contribute to it has been settled for a long time, it has only been in the past few years that oil and gas companies have come to an agreement about the nature and urgency of the crisis. How they are adapting to a near-global consensus about the need to reduce carbon emissions, however, is more disparate, with some companies investing in alternative energy solutions and others focusing on improving the efficiency of oil and gas consumption.

Perhaps the most striking example of the oil and gas industry’s involvement in shaping the future of energy consumption is the Oil and Gas Climate Initiative, which was formed by many of the world’s largest oil and gas companies, and whose members include BP, Shell, Exxon Mobil, and Chevron, to name just a few. The initiative’s stated goal is to “deliver solutions for a sustainable low-emissions future,” and their member companies are “dedicated to the ambition of the Paris Agreement to progress to net zero emissions in the second half of this century.” The initiative’s plan for reaching this goal includes three components: reducing the energy value chain footprint, accelerating low-carbon solutions, and embracing a circular carbon model.

The first objective refers to reducing the amount of methane released into the atmosphere during each stage of the process of energy production, from transport and distribution to usage by final customers. Of all of the greenhouse gases, methane traps the most amount of heat in the atmosphere, making its release a primary concern for oil and gas companies looking to reduce their impact on climate change. The second objective refers to optimizing the efficiency of fossil fuel use by investing in technologies that are more energy efficient and researching new low-emissions pathways for the mid and long-term. The last objective refers to capturing carbon emissions and storing them safely or using carbon in products, and then neutralizing any remaining carbon.

While the Oil and Gas Initiative is certainly a step in the right direction, the organization has plenty of room for improvement. Though many of the world’s major players in the oil and gas space are represented by the initiative, the organization accounts for only 30% of the world’s oil and gas production. And the initiative is mostly focused on making existing fossil fuel consumption methods more efficient rather than switching over to renewable energy platforms, like wind and solar, though they consider renewable energy as a necessary component of the future of energy production.

Many critics, however, suggest that the approach taken by oil and gas companies is inadequate, and insist that the transition to the energy economy of the future necessitates intervention from governments around the world. These critics, which include organizations like the Climate Action Network, blame the oil and gas industry for suppressing research about the effects of carbon emissions, and claim that major political change is necessary, as meaningful change will not come from oil and gas companies acting alone. The Climate Action Network, as well as other environmental organizations around the world, call for policies like a carbon tax, government investment in renewable energy, and an elimination of subsidies on oil and gas. That being said, global demand for energy, and specifically fossil fuels, is higher now than it’s ever been, and even the most ambitious plans for reducing carbon emissions still recognize that fossil fuel use must continue in some capacity for decades to come.