You are here: Home1 / audio 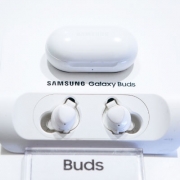 Over the past several years, true wireless earphones – ones that operate as two independent wireless devices that connect via Bluetooth to one’s smartphone – have exploded in popularity. The development of this trend can be traced back to Apple’s Airpods, which were released at the end of 2016 but really gained traction over a year later. Though sales were initially relatively slow, and some critics commented that the earphones resembled Q-Tips, consumers began to appreciate the product’s unique form factor and convenience. Airpods soon became a status symbol, and owing in part to the earphones’ unique feature set and ease of use, turned into a common sight in public places like the grocery store and the office.

For all their popularity and convenience, however, there are some notable drawbacks associated with the product, particularly for people who have Android phones. While Airpods will connect via bluetooth to both iOS and Android devices, the product’s featureset is much more limited when used with the latter operating system. Because Airpods are designed by Apple to work with iPhones, they can take advantage of custom software to optimize audio quality, automatically connect with different Apple devices and seamlessly transition between them, and offer features like Live Listen Audio, which allows users to use their earphones as a hearing aid. On the other hand, Android recognizes Airpods as generic bluetooth audio devices, allowing only for limited audio quality and the bare minimum featureset. For this reason and given the number of other options available, Android users would be foolish to purchase Apple’s wireless earphone solution.

Samsung’s Galaxy Buds, which were released earlier this year, are a direct competitor to Apple’s Airpods, and offer similar bespoke functionality when paired with a Samsung Galaxy device. While the two products aim to occupy a similar consumer niche, there actually exist significant differences between them, the most immediate being their respective prices; Samsung’s offering can be purchased for $99 online, making them effectively half the price of their main competitor. When paired with a compatible device, the Galaxy Buds offer superior audio quality compared to Airpods, as their in-ear design enables deeper bass and enhanced clarity. Like the Airpods, the Galaxy Buds offer an Ambient Aware mode, letting sounds from the environment play over music or other audio and permitting greater awareness of one’s surroundings during use. And also like the newest generation of Airpods, the Galaxy Buds come with a case that charges wirelessly, enabling convenience and making the product truly wireless in every sense of the word. (Although the Galaxy Buds do work with iPhones, the Ambient Aware and automatic sync features will be disabled.)

The Galaxy Buds are likely to be the best wireless earphone solution for the foreseeable future.

Reviews comparing the two products generally favor Samsung’s offering for a number of reasons. Consumer Reports, for instance, conducted sound testing that clearly favored the audio quality of the Galaxy Buds, and found the battery life in Samsung’s product to be superior as well. Business Insider had similar findings, and praised the Galaxy Buds for being offered in a number of colors, whereas Airpods come only in white. And CNet preferred the appearance, customizability, and sound quality of the Buds, while noting that the Airpods were slightly more comfortable and offered better call quality.

If you’re in the market for wireless earbuds, however, it may pay off it wait a little while longer. This is because Amazon is rumored to be entering the wireless earphone space as well, and their upcoming product is thought to offer fitness tracking capabilities, including a potential heart-rate monitor and Alexa integration. That being said, if you’re not interested in fitness tracking or Alexa functionality and own an Android phone, the Galaxy Buds are likely to be the best wireless earphone solution for the foreseeable future.